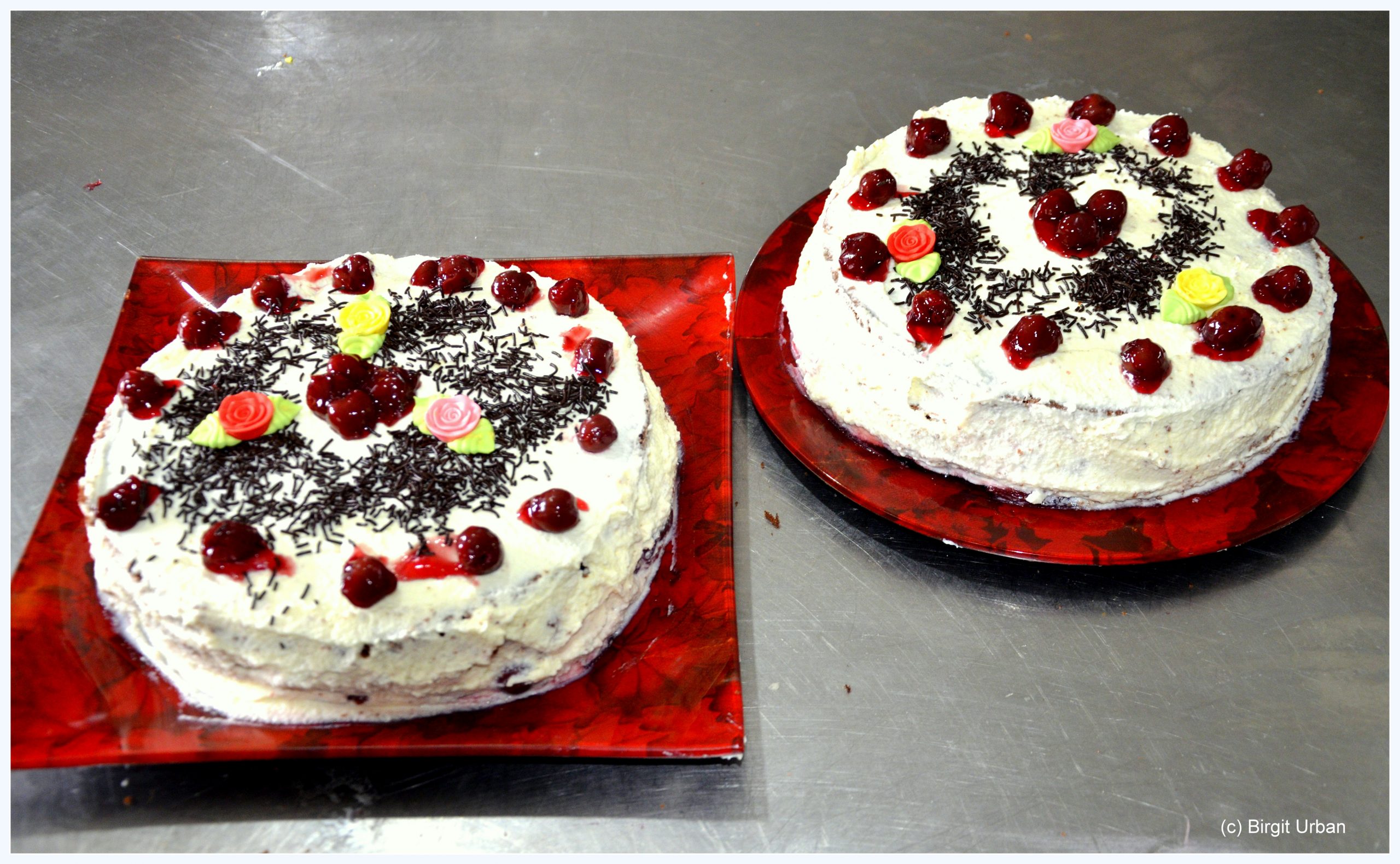 How a Black-Forest-Cherry-Cake made its way to Ikaria

So here we are again: the refurbishment of my little apartment on Ikaria is nearly finished. I hung up some frames, organized the kitchen and decorated the bedroom. Now I am ready to make myself at home and get acquainted to the neighborhood. I have done this several times, in different places, in different countries. But one question always remains the same: how to get to know to the people around men?in touch How to introduce myself? Different countries, different habits. 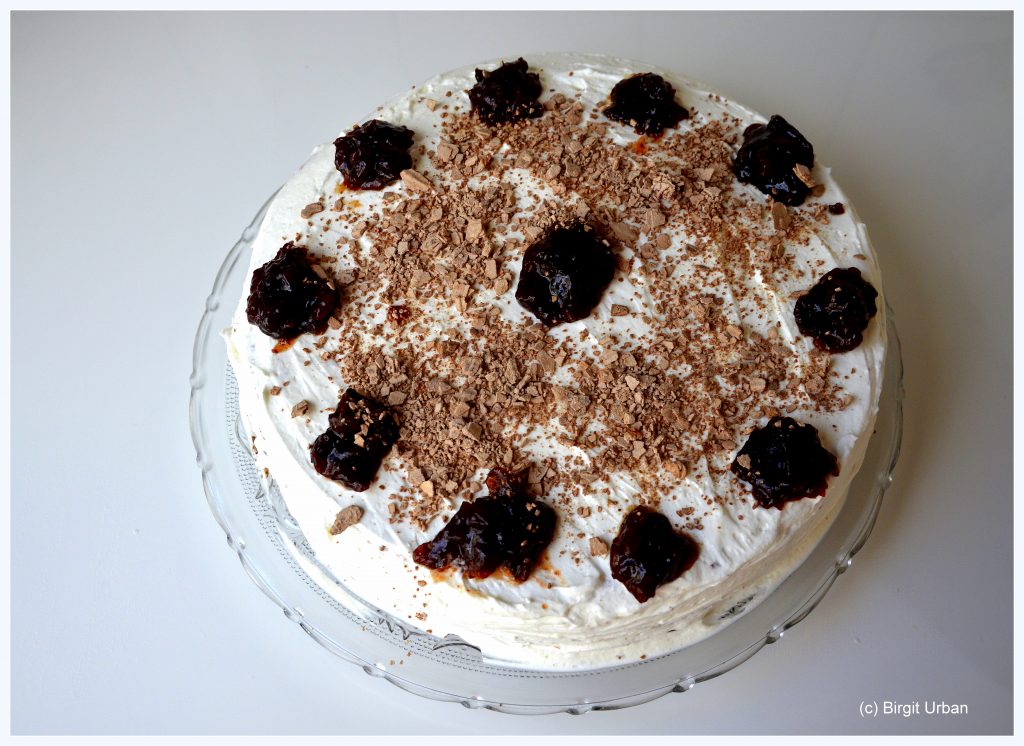 In Germany, we have this little tradition where we invite the neighbours for a drink and they bring bread and salt. I thought about it but then I didn’t follow through the idea, because in Greek surroundings, myself not speaking Greek, this kind of invitation might be a bit difficult. So another idea came up: why not introduce myself to the neighbourhood with a very German tradition and prepare the so-called “Kaffeeklatsch” (coffee hour), where the housewife prepares cakes and friends come round for a chat over a nice cup of coffee in the afternoon between 4pm and 6pm? 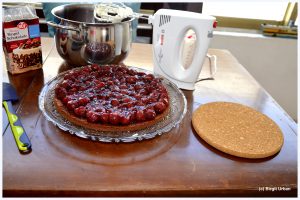 The making of the cake

I thought I would skip the invitation to the house, but I could still bake a nice cake and offer it to the people living and working near me. So I researched my favorite recipes and I checked the local supermarkets for the necessary ingredients. The result was satisfying. I got everything I needed to make my favourite cake: a Black-Forest-Cherry-Cake, which is the queen of a German coffee table!

As this was in March, it was OK. to produce this giant cream mountain, it would not melt straight away immediately in the Ikarian sun and so I got to work. When I was pleased with the result, I carried the cake downstairs and stepped into the door of Niko’s wood-fired bakery just opposite my house. I trust his taste and his opinion, as he is an expert in baking, so he should get the first piece. He was kind of perplex, when he saw this tower of different layers: chocolate biscuit covered with a first layer of cream. On top of it I put a layer of black cherries, covered again with a chocolate biscuit. 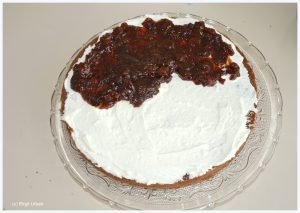 The whole cake was covered in cream and decorated with chocolate chips and cherries. Niko carefully cut the first piece, but before he could taste it, an old guy came into the store. He stared at the slice of cream cake on Niko’s plate, asking: “What are you eating, man? Did you come up a new kind of sweet?” As Niko is a very polite person, he offered his plate to the chap telling him: “You may try first. It is made by this German lady here, she just brought it in.” The guy looked at me and I could see that he was about to voice a remark, but he was so kind as to not uttering it. Instead he said: “Let’s see what Germans may bring that’s good to this island.” So he gave it a try and after a little while, I could see his face melting away. Obviously he liked the mixture of “sour” cherries and sweet cream. It took him a  short while, but then he turned to Niko – of course not to me, saying: “You can keep her; she can do some more of this kind of stuff!” So I thought to myself , this is my chance. The rest of the Black-Forest-Cherry cake made its tour around the neighbourhood; people were curious and open to the new taste I had brought to town. When the cake was finished, I got some new orders for further productions; I viewed this is as a kind of compliment – the Ikarian way – and I was grateful for it. 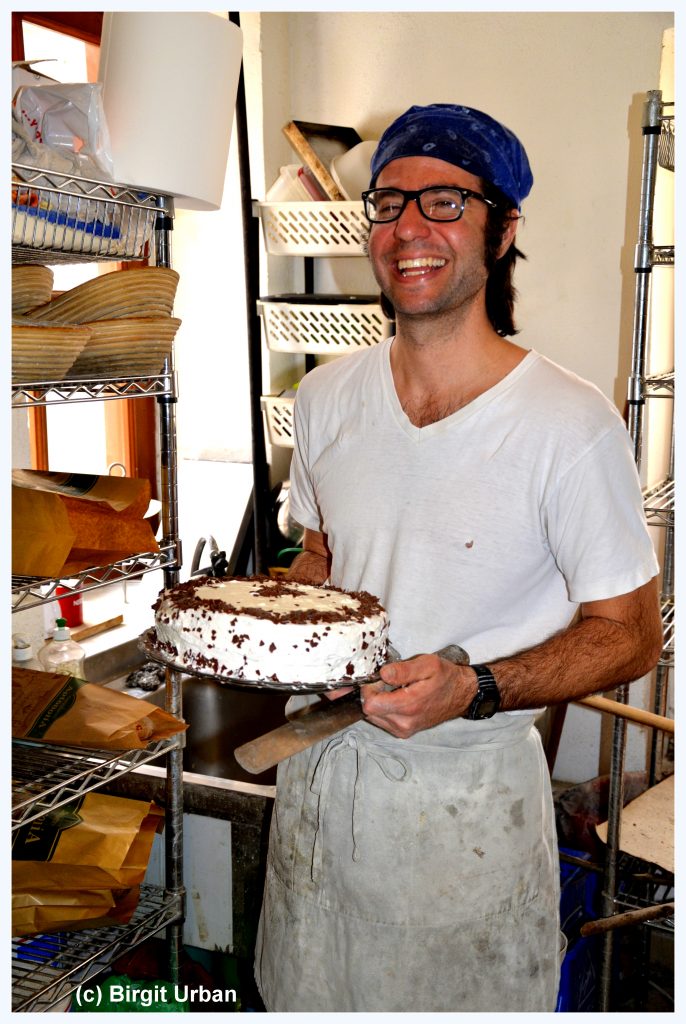 From that moment on, the Black-Forest-Cherry-cake became my “trade mark”, when I am invited. In the meantime, I have produced quite a number of these cream mountains, now replacing cherries from the supermarket with cherries picked on the island. In June I have a standing order with local producers for a good amount of jars And I also learned to prepare the cake in different places and sometimes under difficult circumstances. Last July I wanted to offer my favourite cake to a friend, who was celebrating her birthday at a Panagyri, somewhere in the middle of the island. So I took all of my ingredients and kitchen utensils with me to prepare it on the spot. At night you could find me in a little corner of the kitchen in a remote place up in the mountains, trying to beat the cream – quite difficult, when the place you’re working in is around 40 degrees hot and feels like an oven …. and you have to make your way through piles of onions, goat bones, peeled potatoes and salad. In addition to that, I was confronted with a number of curious people, coming in and out into the kitchen, not saying a word, but sceptically observing me and my struggles with the liquidcream. 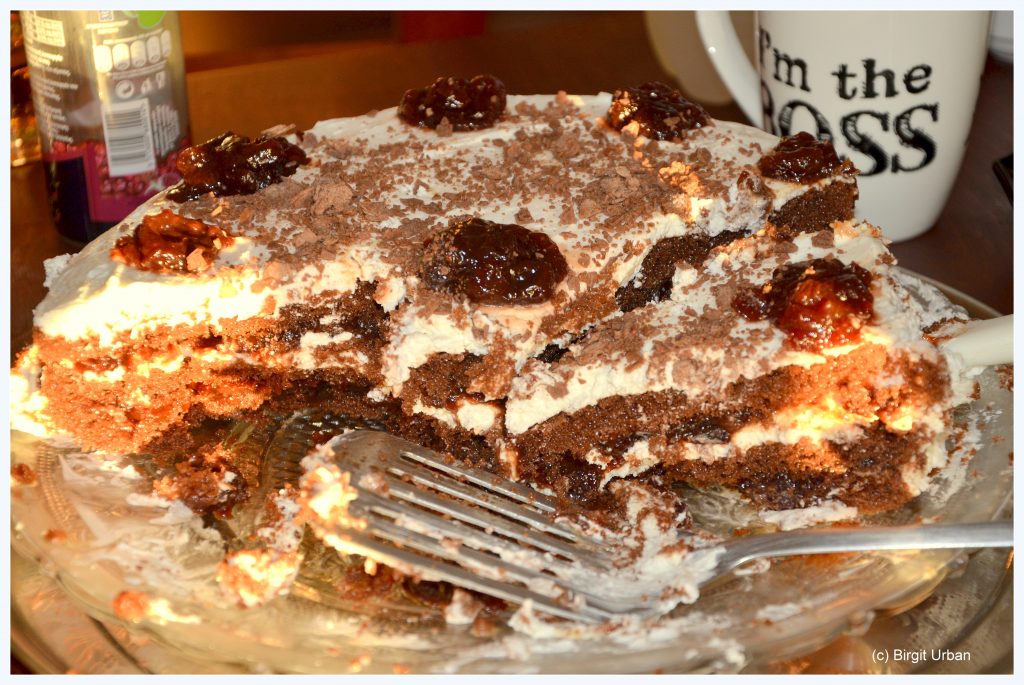 But: all over the world women cooking have this kind of silent understanding – no talking, just watching. So one of the ladies in charge of the kitchen took my mixing bowl and put it into the freezer, telling me that she would look after it and that I should come back in half an hour. And indeed: she made it happen! With some further instructions from her side, I was able to  offer the birthday cake to my friend. This particular cake would not have won in a beauty contest, but it was awarded by the group of people at the table, who enjoyed the different taste. And then the rest of the cake melted away during a hot summer night under a full moon at a Panagyrie on Ikaria….. and ever since I have continued to bake Black-Forest-Cherry-Cakes on Ikaria…. 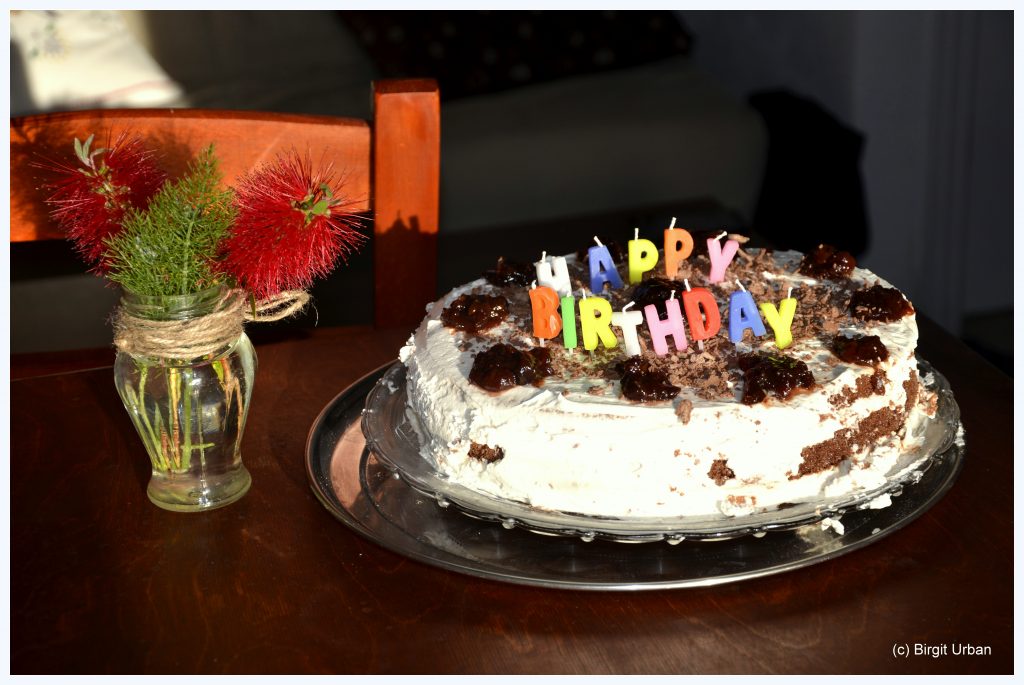