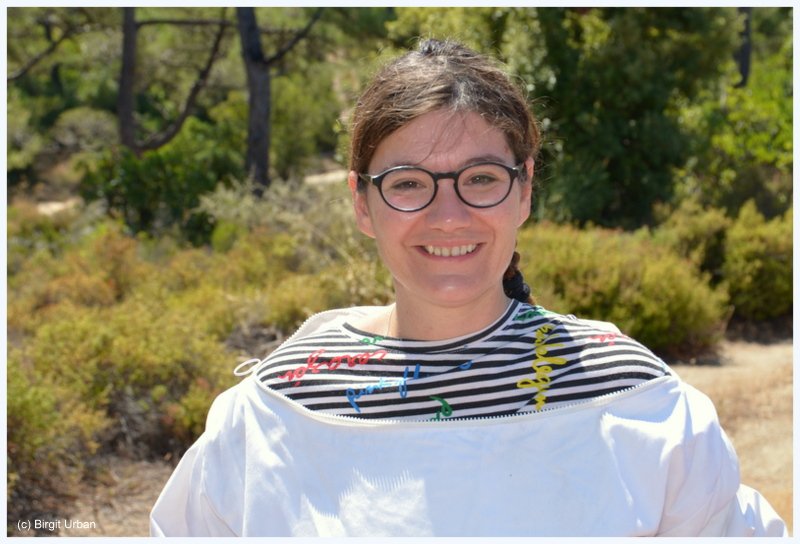 Fotini drives her little car quickly over the bumpy dirt road. It is a hot summer day on Ikaria. Some kilometers further down the road, you can enjoy Messakti beach packed with hundreds of people, who are making the most of a typical Greek holiday day with sunbathing, surfing and beach volleyball. But up here, in the area of Pezi, it‘s a completely different story. You don’t meet anybody. Through the dust clouds that the car stirs up, you can barely see the road, but that doesn’t matter, as Fotini knows it by heart. She comes up here two, three times a week to look after the four bee colonies she placed there a few weeks ago. They are family, so they need to be looked after carefully. The other 26 bee colonies are located in different places in the Raches area and she will tend to them on another day.

Suddenly Fotini steers her car onto a small forest path and stops the engine. While the dust clouds are settling, silence and summer heat encircle us. Fotini pulls out two beekeeper suits from the trunk of her car, handing one over to me, while she routinely slips into her own. I am still struggeling with the zippers and have to get used to the heat in this unfamiliar working suit, as Fotini is already approaching the first beehives. Even though different beekeepers have placed a few dozens of beehives in this area, she knows exactly where hers are. They are shimmering white in the sunlight and her trademark – the Greek „Φ“ (F) for Fotini, which she has expanded into a spiral of life (the very symbol for the cycle of life) – can be seen from far. 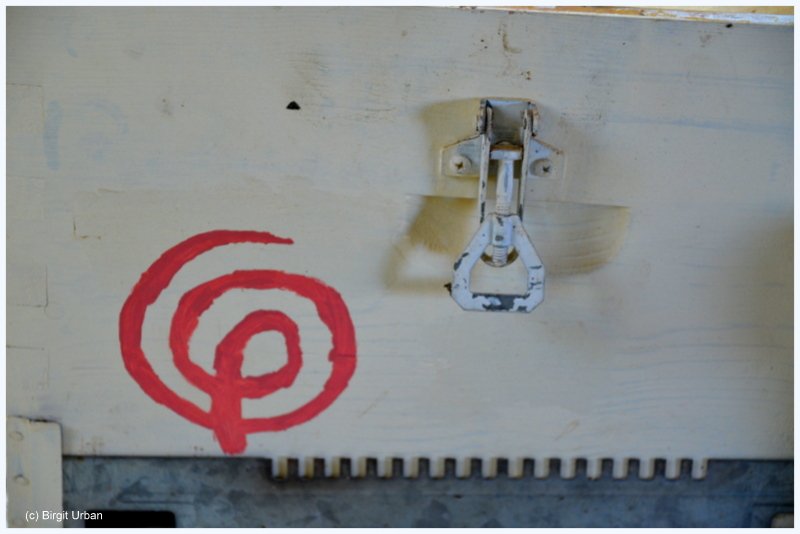 From here the bees are in lead.  I do learn that bees are also subject to mood swings and if you want to approach them, you have to ask for permission. Fotini is a good translator for me for this foreign language and she explains to me that I first have to stand still until she finds out  the mood of the day of her family members. Obviously they are bit nervous today, so it will be difficult to open all the hives to check out the honey. Nevertheless, Fotini carefully lights up the smoker, to calm down the bees so that she can open at least some hives. 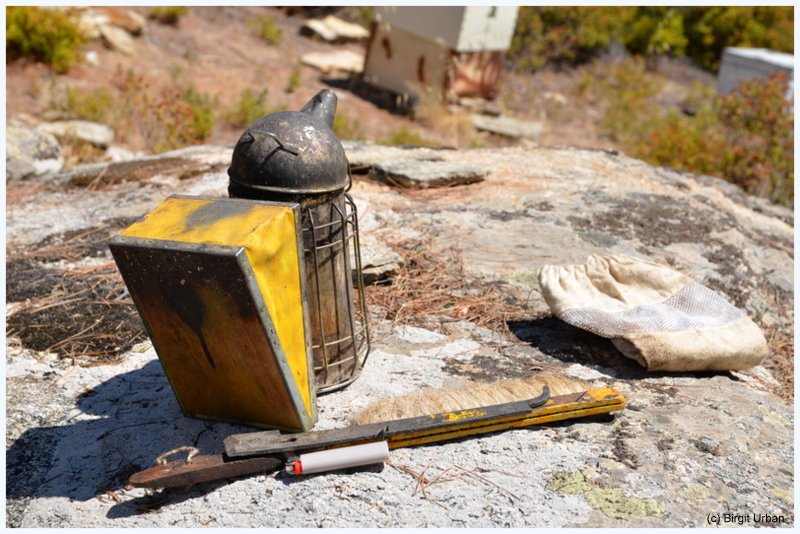 The smoker – a necessary tool, when you work with bees 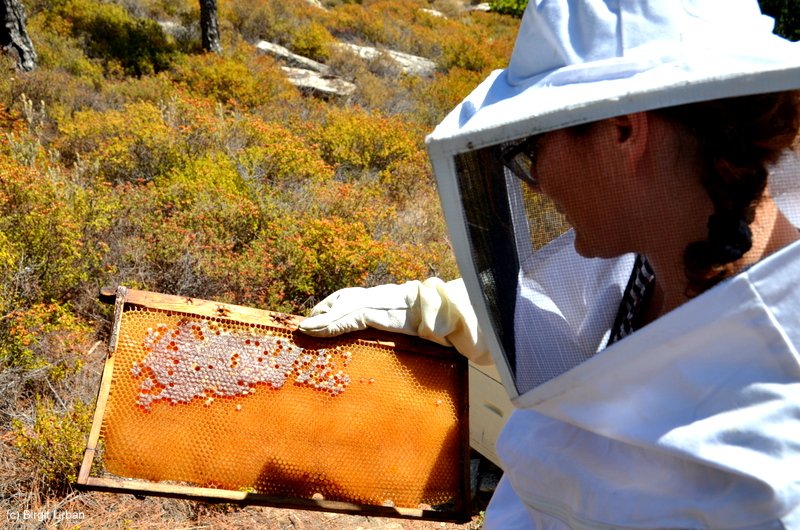 Fotini is checking the result of her bees

Even though I am very curious to learn about the life in a beehive, I still remain motionless where Fotini told me to stay. I observe her calm movements, which look like routine  but at the same time follow the moods of the bees. Watching Fotini like this, I suddenly understand: that’s how it looks like, when you live in perfect harmony with nature and your surroundings. Perhaps these scenes have explained to me more about Fotini’s life and her Ikarian roots, than all our conversations would do. Here I was able to appreciate, how many hours she has spent with her uncle to learn everything about beekeeping from him. I understand how she develops this knowledge in her own way, still standing on the shoulders of her Ikarian ancestors. It was as if the spiral of life opened for a moment and gave me a brief but deep insight of Fotini’s history.

Later, when I was allowed to move again and got rid of the beekeepers suit, Fotini showed me around and introduced me to the places which she calls her ‚retreats‘: the shady plateau, where you can sit on a rock, enjoying the beautiful view to the sea and the sound of the heat shimmering in the air. She shares a history with those places: when she was a kid, she liked to stroll around here, learning about the plants and herbs from her grandparents. As a teenager, she loved to hang around in this area, having a picnic, just chilling out with friends. Later, it became a good place to refill her batteries, after she’d had a full day working at her parent’s‘ hotel in Arministis during the summer season. And today this place gives her a little break to get her balance again, before she heads off home to continue her different activities to make a living. Sitting quietly on this rock, I understand how Fotini’s life is going around in circles, sending her far away from this place to learn and to grow, but always calling her back. 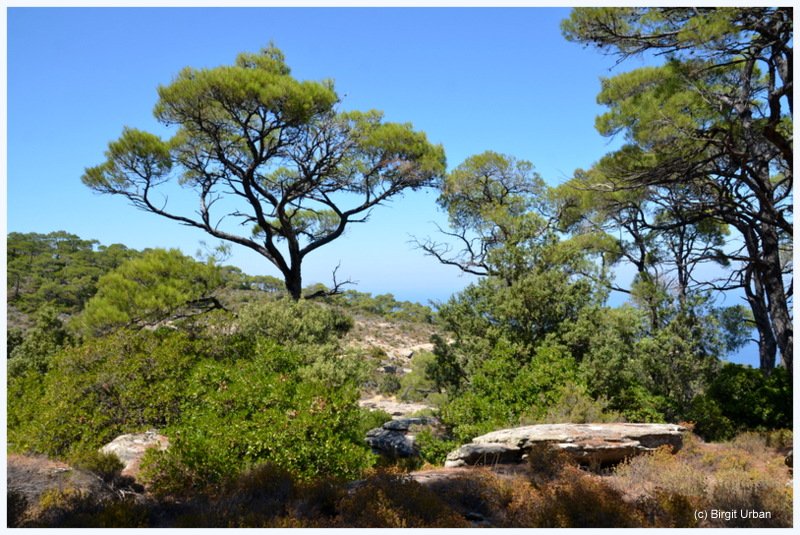 A place to recover … somewhere up there in the mountains

Fotini grew up on Ikaria, her grandparents had a house in Christos Raches and her parents have a hotel in Arministis. After highschool, she went to Athens to follow a training in the field of interior decoration . It was ok, but didn’t really offer her enough space to develop her creativity. So she quit and worked different jobs, which allowed her to have a decent life in Athens; a nice apartment, enough income to go to parties and to enjoy the Athenian cultural scene in the big city.  She loved travelling and she had a chance to live in Denmark for nearly one year. She liked the Northern culture, the structured life, a lot of food for thought. But she always returned to Ikaria during the summer season to help her parents with the hotel.

With the financial and economic crisis, life became more difficult in Athens and Fotini returned to Ikaria for good in her early 30s. She worked in the hotel, got married, got a daughter, got divorced. For some time now she lives with her daughter in her grandparents‘  old house in Christos Raches. She works in the garden, where she once worked with her grandparents. With her daughter’s help, she grows vegetables, herbs and fruit and just as she learned about nature by observing her parents and grandparents, her daughter is learning from her.

This is the normal way for passing on traditional knowledge about nature and life to the next generation on Ikaria. But Fotini is not just repeating and keeping the traditional knowledge, she is also developing it further. In 2018, she returned to Athens with her daughter to take part in different courses to expand her knowledge in beekeeping and to learn more about the healing properties of plants and herbs so that she can use them for making ointments, herbal extracts and soaps.

Coming back to Ikaria, she transformed a little hut in her garden into a laboratory, where she is now experimenting with the different recipes for soaps and creams by merging bee products with herbs and plants. She asked around which ingredients women used in past times to give their hair a silky shine. 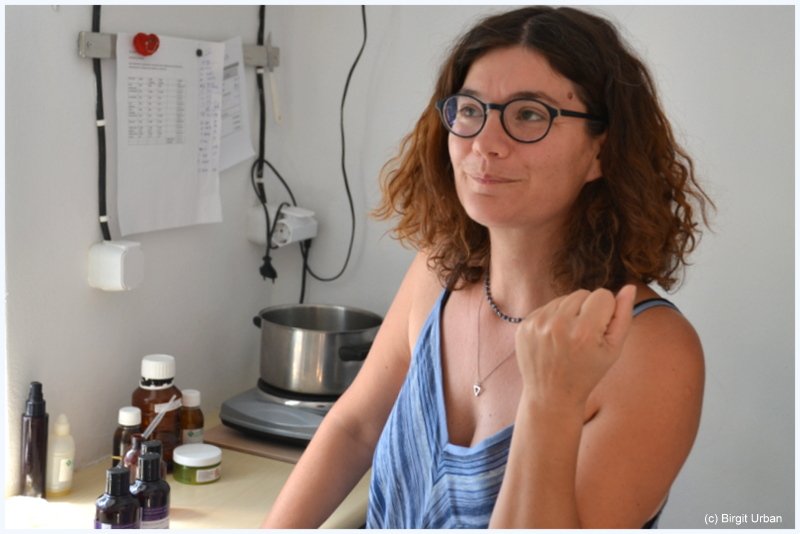 Fotini in her little workshop, where she is preparing her soaps and creams

All these secrets are not written down on paper, they are only passed on orally in the family. But now Fotini is writing them down – the old ones and her new creations – creating a sound library of knowledge. When she talks about her recipes, showing the boxes and bottles with the different ingredients, carefully stacked on two shelves in the small hut, you can sense the joy this young woman has in bringing together her different experiences and knowledge to create something new, perhaps something more useful and more beautiful. 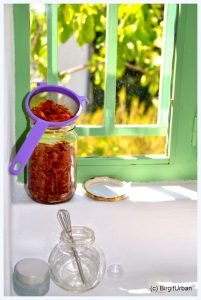 You also understand that Fotini is used to being alone, to working alone. Ikaria gives  you a good lesson on it. Especially during winter times, you have to endure the roughness of the season in the mountains of Raches. But Fotini is used to it, she likes it. She enjoys the time of intense work, when her daughter is at school. She is happy that she can even choose whether she continues with the preparation of creams and soaps or if she switches to the workshop to start repairing the beehives, which is also a demanding job  during winter time. Even though you might have never heard about the typical qualitiesof Ikarian women, who are described as strong and independent, you may get a good sense of it as you follow Fotini through her day.

She trusts  herself and she‘s sure about the things she is doing, because she does them with patience and passion. Fotini follows a slow but precise  rhythm that goes along  with the seasons on the island. This gives her roots and these roots prevent her from dramatising when she looks at the latest developments on the island. The „blue-zone-idea“ about longevity, bringing people from all over the world to Ikaria to get to know THE recipe for a long and healthy life? Fotini smiles quietly: „It is a hype. It will soon cool down. Most of the people who come to Ikaria because of this myth have no idea about Ikarian life. Ingredients for longevity on Ikaria are – among others –  the love for life, the strong social ties, the willingness and ability to live autonomously, something that you can‘t understand during a 2-week-vacation. More time and openness are needed and perhaps, who knows, a deeper knowledge about the Ikarian way of living could be a remedy for the current crisis.“

The wind farms in the moutain, where – according to plans – more than 100 windturbines might be built in the near future? This would be a disaster for Ikaria and would have a deep impact on the natural heritage of the island. Ikarians might be slow in reacting, but they will react dynamically in time. The many panigyria during the summer and the environmental problems, like garbage management linked to them? „This is a problem for which one should not hold the tourists responsible“, Fotini is arguing; „Perhaps, we, the Ikarians, should first learn to respect our island, before we put it on the market for tourists.“

Fotini is aware and concerned about the many challenges Ikaria is facing these days. She is willing to do her utmost to preserve the beauty of her homeland. In that respect, she appreciates the fact that more young people from outside Ikaria are coming to the island to live and work here. If they are coming to stay, it will be possible to join forces and to learn from each other. In that way it might be possible to build a future for the island, for an Ikaria where her daughter would love to live and would like to stand on her ancestors‘ shoulders and to further develop their legacy … just like her mother, Fotini, is doing and setting an example for her. 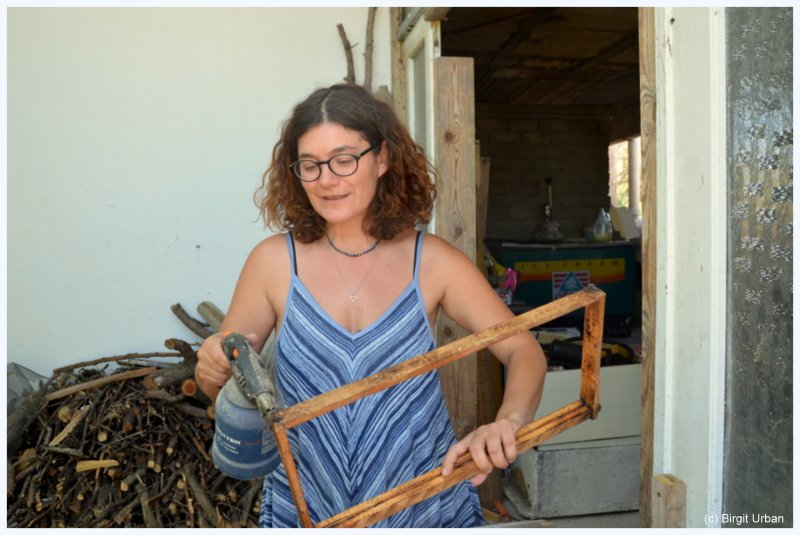 Fotini is preparing the frames for the beehives