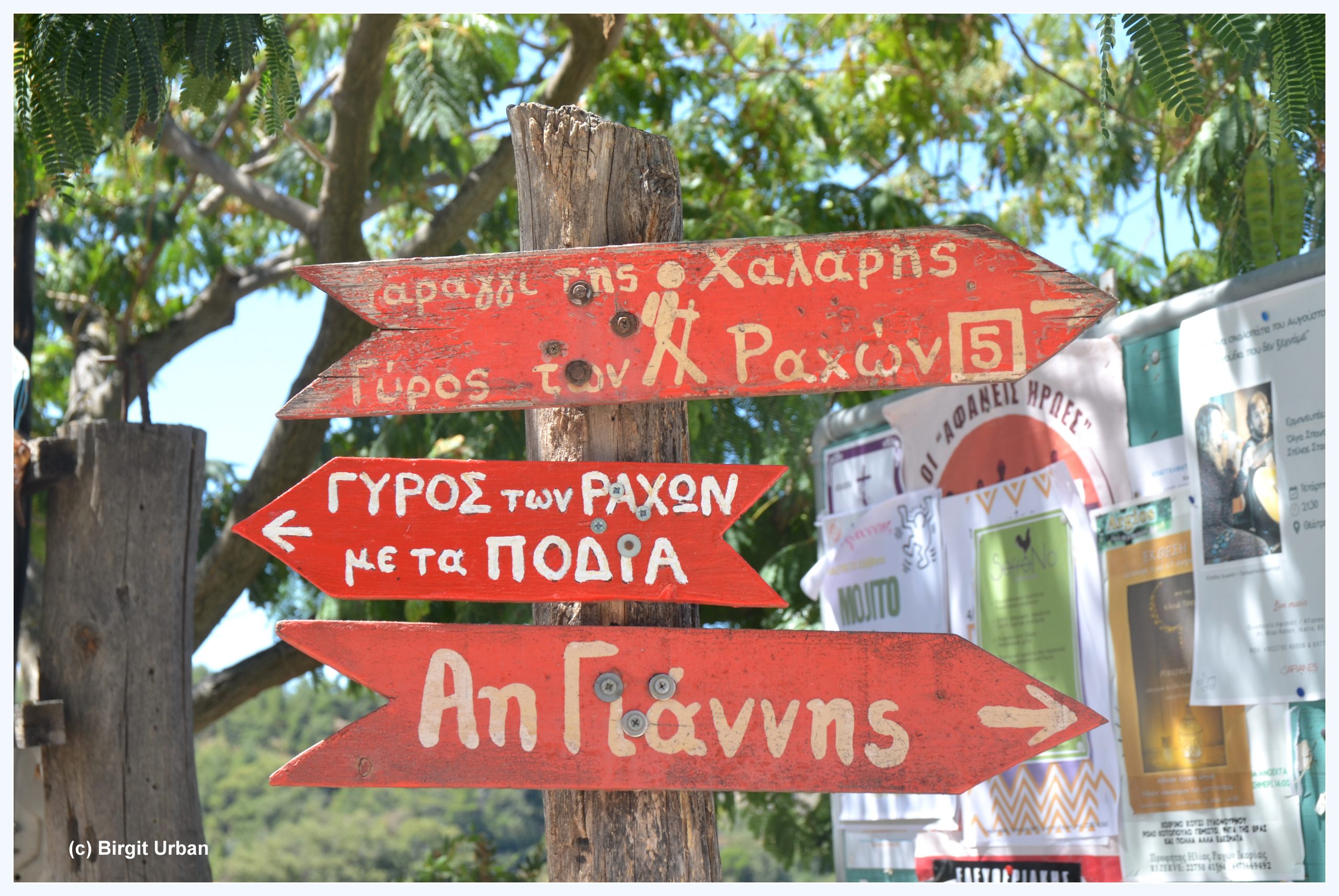 When I arrived on Ikaria several years ago, the island promoted itself as a place with nice beaches, fishing boats and pituresque villages by the seaside. Somehow the island was just another part of the overall idea of Greek islands: blue water, good food, carefree time at the beach. Even though I heard stories about the rocky landscape and the old Ikarians walking up and down the mountains to go from North to South and East to West, I did not really find any information in Agios Kirikos that hiking or even walking was still on the Ikarians’ agenda. I was a bit annoyed, because these rocks called for my hiking boots, boots that have a good track record in the German, Austrian and Italian Alps, but I could not find a map or even a sign indicating the entrance to a hiking path. 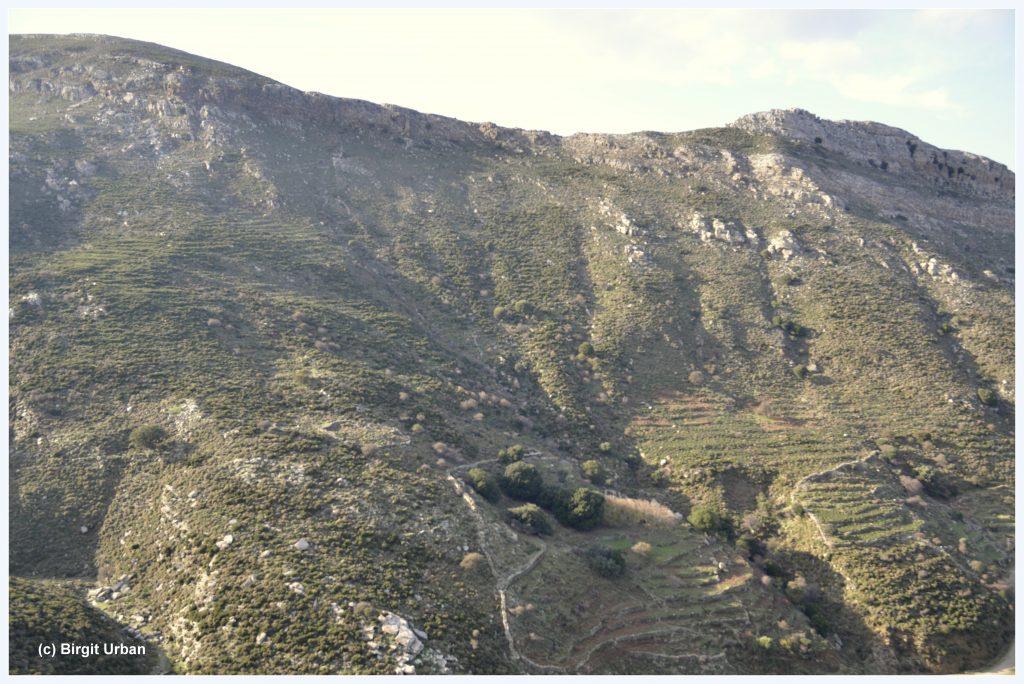 Therefore I was nearly thrilled when I learned over a coffee, that Ikaria has a hiking club located in the Northern part of the island. A „hiking club“, wow! I was thrilled and wanted to know everything, now!

It took me a little while to get into contact with the club, but then I found myself sitting on a bench in Agios Polikarpos next to Angelos Kalokerinos, one of the founders of the Ikarian Hiking Club „OPSIkarias“. Gently and patiently he answered all the questions that only a city girl can ask. What does the Hiking Club do? Are you organizing hikes? Where can I find maps? How difficult are the paths? How can I join?

I was impatient to learn, because in my mind I had the idea that a hiking club on Ikaria may have – somehow – a similar structure as the well known « Alpine Hiking Clubs » I was a member of. Little by little, Angelos calmed me down, telling me that OPSIkarias is an official club, only with a small number of members but with many friends and followers. He explained to me that one of the main priorities of the club was and still is the re-opening of the old hiking paths, which represented in former times the main road infrastructure of the island. Yes, organised hiking tours were also taking place, mainly led by professional hiking guides with a good knowledge of the territory. The club also organises meetings in the field to clean the paths and to mark them. 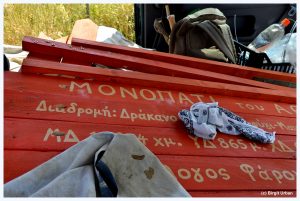 Answering the question marks on my face, Angelos added:“You know, hiking is not really acknowledged on this island. Of course it belongs to the cultural heritage of the Ikarians, but it represents more history than present living. With this background, hiking is not promoted as an important tourism activity. Ikaria prefers to stick to its label as the « island of panagyria ». In this context our work is focussing on the very basics: raising awareness that the Ikarian mountains are offering an enormous treasure of untouched nature, wild and intact natural environment, hidden waterfalls, spectacular views and an endless richness of stories about nymphs, elves and other myths. And to open this beauty to the people, we are marking the paths so that people can orientate themselves. 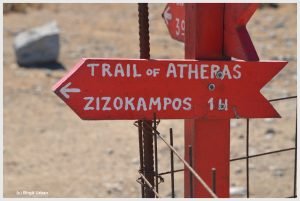 We are doing this on a voluntary basis. We are neither paid for it by local government, the region or the national government, nor do we get funding to buy the necessary material like colours, wood for the signs etc.. We pay it from our private pockets and from time to time we receive some donations. We do not complain about it. We are doing it because we love those mountains, we want to protect its precious landscape and we want to contribute to a sustainable development of the island. Hiking – for us – represents an environmentally friendly form of tourism that could extend the summer season and could attract people to the island, who are fond of nature and its rich stock of herbs» 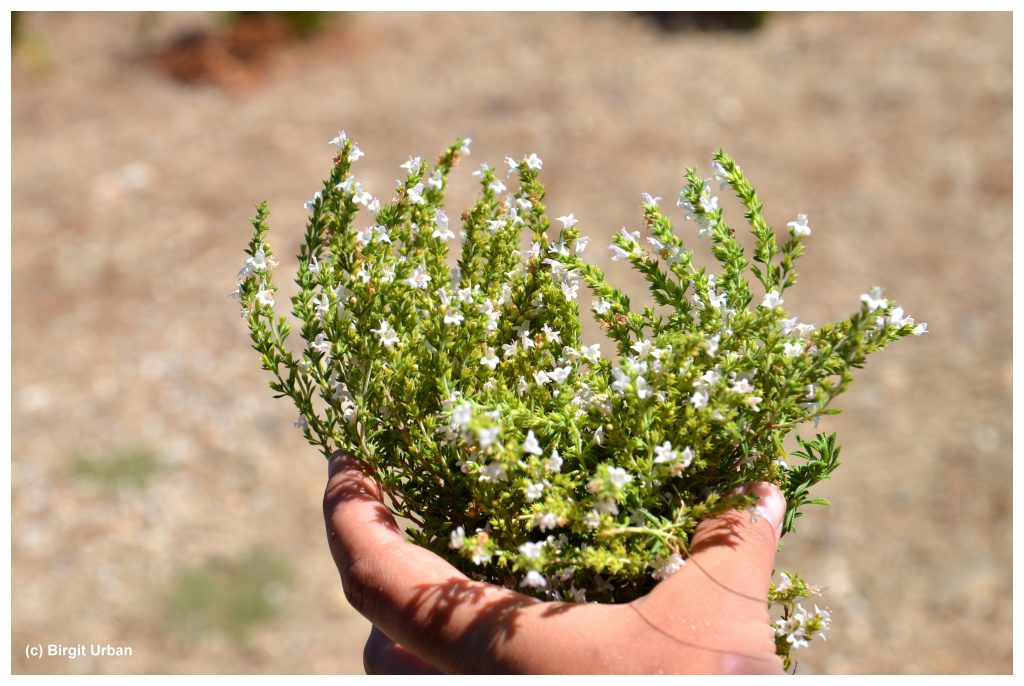 That was food for thought for me. So far I had always understood that the „making of hiking paths“ is a public task, financed by regional, national or even European programmes. These programmes will also pay for the little signs on that paths, including the corresponding maps and these days, Google Maps. So I learned that  on Ikaria the story is very different – like so many other things – and I was curious to find out more.

A few days later, I set foot on a small hiking path in the area of Christos Raches, guided by Xenia, a Greek-Austrian, who has been living on the island for many years. After a few minutes I understood that she was the right person to introduce me to this new world. And what a precious world! That day, she has chosen the tour in the Chalares Canyon and from the very beginning I didn‘t know on what I should concentrate first: on my feet so that they can settle carefully on the narrow path, which in many parts was overgrown with bushes, or on the spectacular views that opened in front of me, introducing me to the majesty and beauty of the inner world of these enormous rocks. Or on the beauty of a waterfall and little lake, which we found on our way and which popped up like an unexpected painting in this landscape of green bushes, wild trees and grey stones. 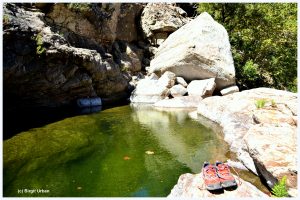 In general I was speechless, just from time to time I could stammer: „Oh my God! This is so beautiful!“ sounding like an American tourist. As I don’t like myself acting like this, I ended up with my mouth shut, just taking some pictures from time to time, knowing that these pics would never reflect the beauty and the inner touch this landscape left on me.

Xenia watched me carefully, knowing that this region of Ikaria leaves its impressions on its visitors. She smiled when she could feel that I «got the message“, nature and the mountains were sending to me. As there was no need to talk much, Xenia opened her backpack and got some small jars out with white and red colours and a brush. 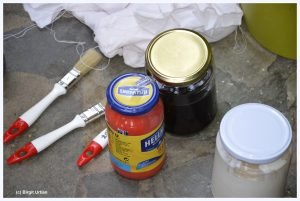 Without slowing down our hike, she painted dots or sometimes even flashes on the stones, always in spots where they could be seen from far and I understood: this is the marking system of the hiking path. It consists of different steps: first comes a big white dot. When this has dried, a smaller red dot is painted in the centre –well, it’s not only «red», it’s more orange/red as it’s a special mixture of different colours (this colour mix will remain a secret, do not even try to get the full recipe). The final touch is then a clear vanish that makes the dot more resistant to the harsh weather conditions in the area. 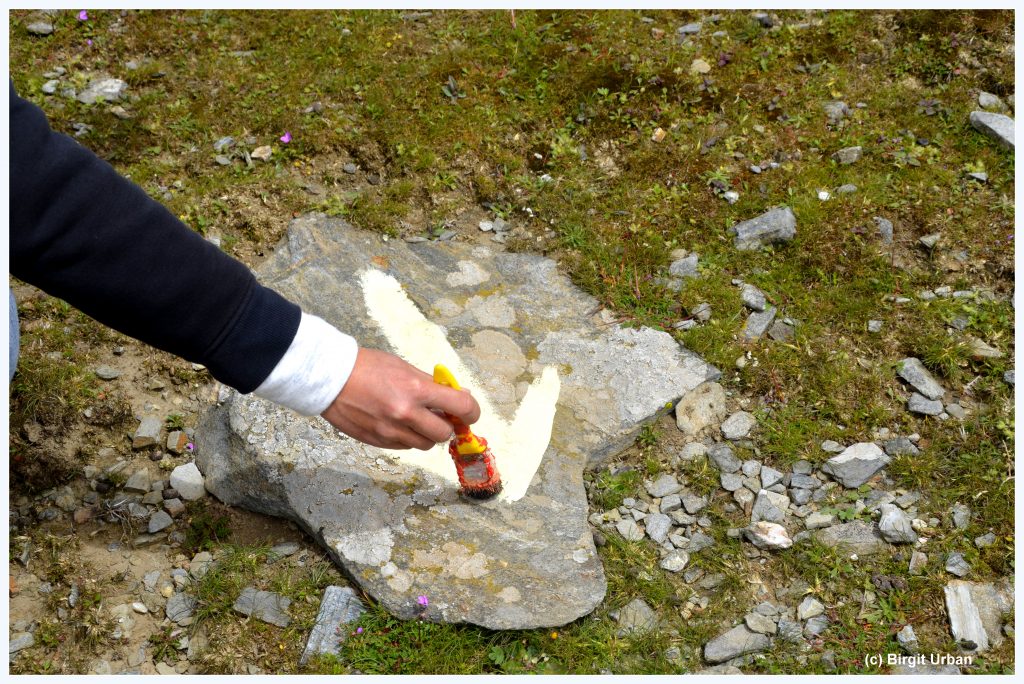 The „dots“ are part of a broader but consistent marking system: you can find tiny pyramids made of stone, called «cairns», which are built in outstanding places and can be seen from far to give you further orientation on your path.  These are supplemented by red wooden signs, which indicate the names of the various villages in the surrounding area. 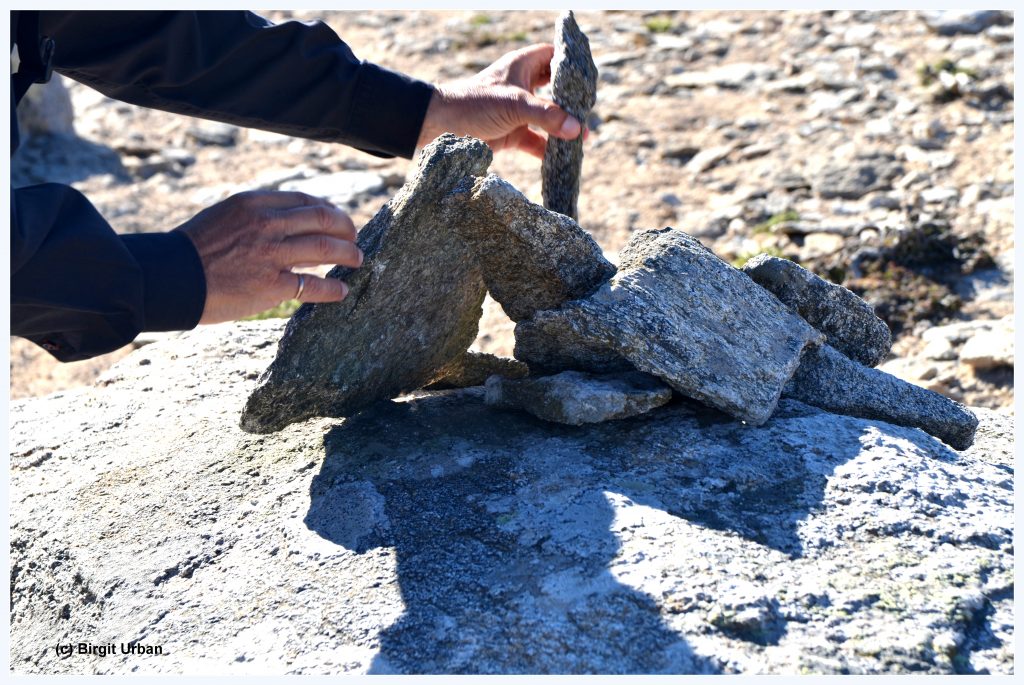 Following Xenia in her work, I understood: making a hiking path on Ikaria does need commitment and organisation. The wooden signs are handmade – a work that is done during the winter by some members of the hiking club – and then carried on the shoulders of the hikers to various places in the mountains. OPSIkarias also cleans the existing paths, meaning they are cutting the overgrowing bushes with saws and knives. 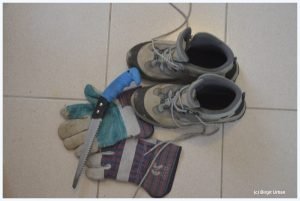 In comparison with an „opening of a hiking trail“, this is an easy task. Opening a path is another story. It needs a lot of planning, information,  good material …. and people. As OPSIkarias is eager to preserve the cultural heritage of hiking on Ikaria, they are trying to follow and re-open – if necessary – the old paths that had been used by generations of Ikarians to cross the island. Therefore they are trying to get as much information as possible about the old infrastructure, meaning this needs a lot of talking with the old people who had run these paths since their childhood. 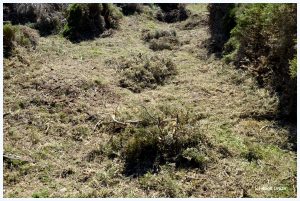 In addition to it, some paths need more sophisticated material such as ropes, to ensure that even more untrained hikers can master the difficult paths in the area. And after the making of the paths starts the cartographic work. This also needs a lot of knowledge and time for detail.. and it is done by volunteers, too.

At the end of our hike on that very day, I was not only in deep thoughts about this introduction into this wonderful natural paradise, but also thinking that I should take nothing for granted on Ikaria. The making of this hiking paths gave me a good lesson: when elsewhere I may complain that a hiking path is perhaps not broad enough to give you an easy hike –  a hiking trail on Ikaria has a different story. It is gift that is donated to me by volunteers. By people who love their island and who are offering me the possibility to share this beauty with me. What an incredible gesture! What an incredible offer! 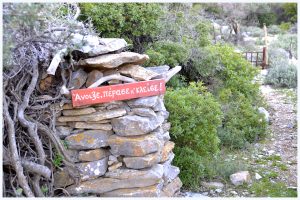 Since that day, you never hear me complaining again that I can‘t see the entrance of a hiking path at first sight. Just to the contrary: I am extremely grateful for every red sign I see, knowing that this is the work of so many volunteers. Yes, so many, because over the years I was able to see that more and more local villages are joining in, taking over the marking and cleaning of the old paths in the surrounding area of their village. And even in the Southern part of Ikaria, like in Faros, Drakano and Katafigi the red signs can be found, showing the path to incredibly beautiful places. 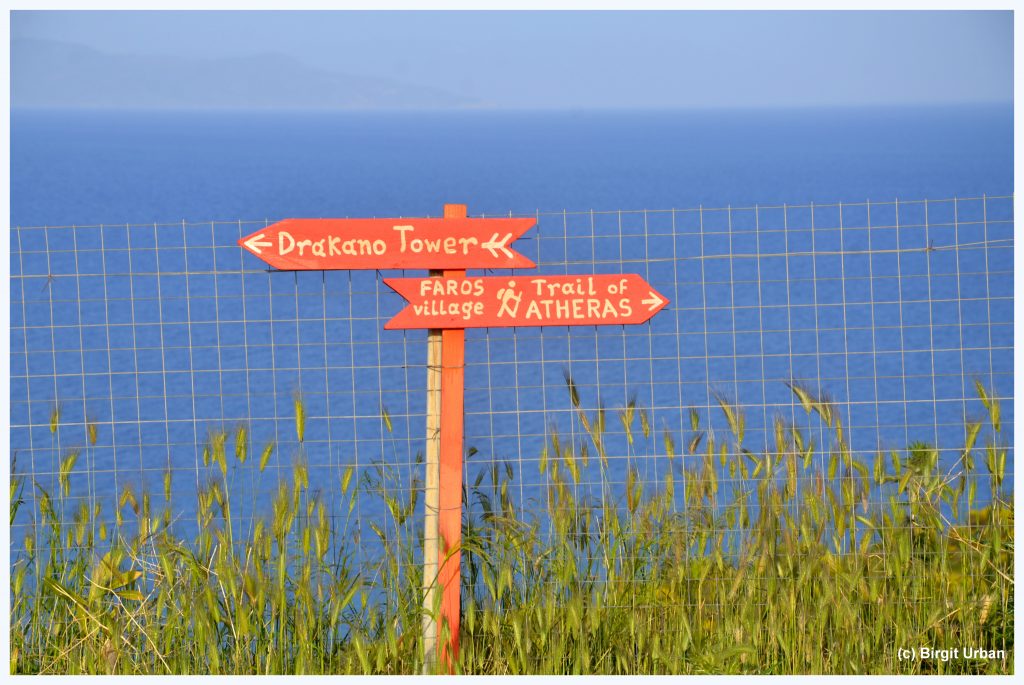 There is still a lot to do, as public money is scarce and an official tourism concept that includes hiking as a sustainable and environmentally friendly form of tourism is still missing. And – above all – the cleaning and the marking has to be repeated on a regular basis. But for some time now, I am happily following the open call of OPSIkarias to mark the paths. Putting white and red dots on the rocks represents to me one of the most useful work I can do …. because it is a special gift to those who want to learn more about the deep and hidden story of this island.

So next time, you see white and red signs on your path, don’t take them for granted. They are just a tiny sign of a much bigger story. A story of dedication, commitment and love. 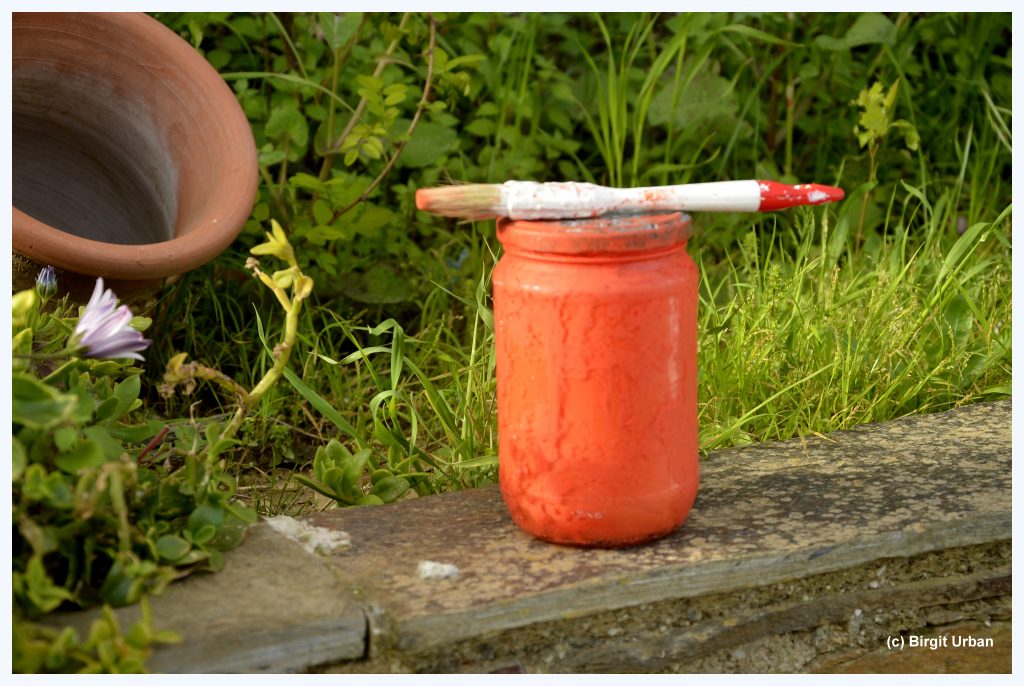