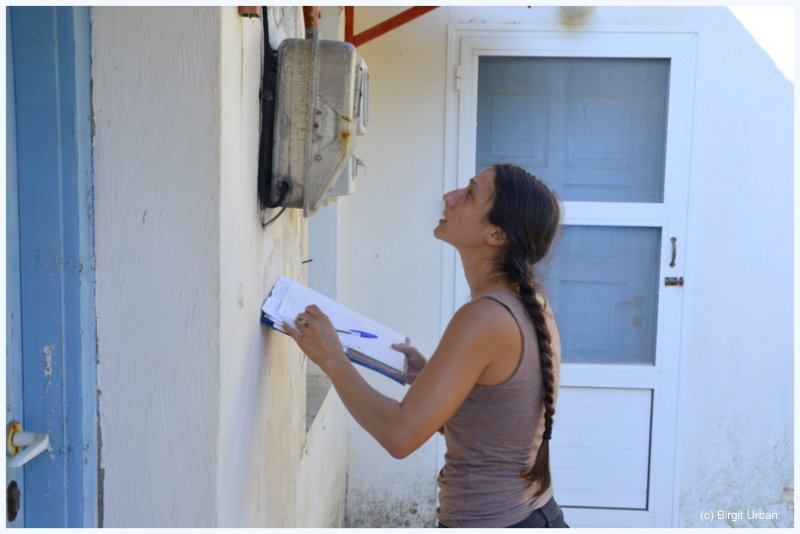 Mandy Dragataki – the woman, who is looking after your electricity bill

When you leave Ikaria by plane, Mandy might be the last person from the island who is giving you a hand. You can’t miss her: she will be standing at the boarding gate, her long dark hair braided in two strong braids, and with a smile she will check your passport and boarding pass, wishing you a “good flight”. When you see her there, handling the routine work of the ground staff, you might not imagine that her Ikarian storystarted just four years ago.

Nevertheless she has roots on Ikaria, deep roots. Her grandparents are from Xilosirtis and Chrisostomos and she is a grand-niece of the famous Ikarian artist Nikos Ikaris – you know, the artist who made the well-known Icarus statue in the harbour of Agios Kirikos, Ikaria. But on Ikaria you don’t make a big fuss over celebrity connections. Therefore Mandy sits quietly on her chair in the  “Kafenion”, sipping her coffee, enjoying a little pause between her different jobs.

When she talks to you about her story, she still seems to wonder how come she sits here so relaxed with her hiking boots and casual clothes, surrounded by the sea and the mountains, instead of staring into her computer in an office of the Greek-American school in Athens, working on her ‘to-do-list’ as a pupils’ supervisor. 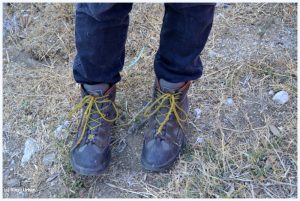 Good shoes are indispensable for this job

Mandy takes a deep breath as she remembers how hard she had been working to get that job in Athens. She graduated in England with a Bachelor in English Literature and a Master in Psychological School System. So her English was perfect when she came back to Greece in 2008. She was enthusiastic to use her knowledge and to work in the Greek school system to make changes happen.

But the economic and financial crisis was in the making and it was difficult to find an suitable job. In the end, she joined the Greek-American School in Athens, where she built up an advisory programme for pupils. It was a new step, but Mandy has a kind of perseverance for not giving up (you may call it her Ikarian heritage). So over the years she succeeded in writing a success story and she became a good mentor for a few generations of pupils. Little by little her career developed.

But the perspectives offered within the school didn’t matchthe life outside it in Athens. The crisis worsened and with it, nervousness and anxiety in society were growing. Everyday life became more and more difficult. Mandy and her boyfriend Sideris were running forwards and backwards to organize their lives to cope with all the changes. 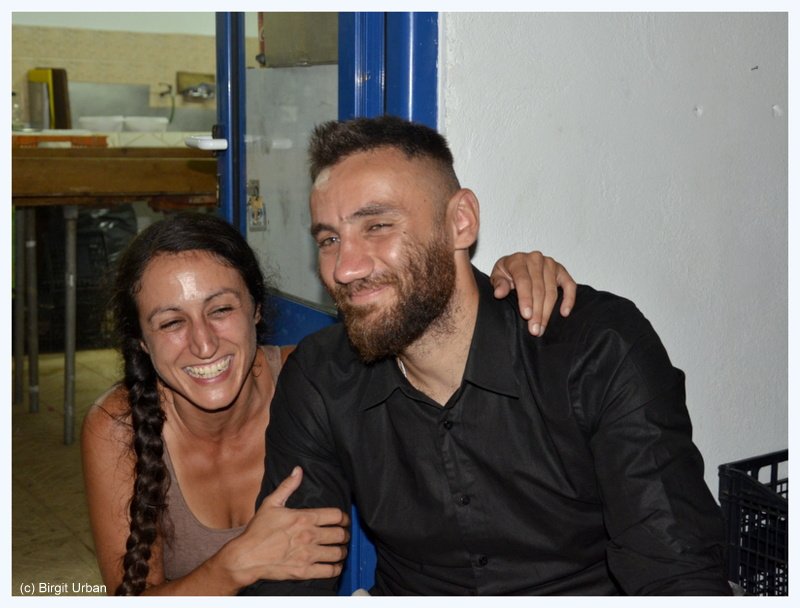 And then the accident happened: Sideris had a serious accident with his motorbike and had to stay in hospital for weeks. Mandy was all the time besides him. They had long talks about their lives and prospects. They refused to be crushed by the crisis and little by little the idea grew to turn their back on Athens and to move to Ikaria.

Mandy remains silent as she recalls the memories of this difficult period . She still considers it as the biggest challenge and hardest decision she has had to take so far in her life: quitting a good job with a regular income, leaving family and friends in order to start a new life on a rocky island in the Eastern Aegean Sea not knowing where the money would come from.

Their families were more than skeptical, even though Mandy and Sideris would have a base to stay as they could live in the family house in Xilosirtis. Despite the doubts, the couple wanted to make it happen. So Sideris, a successful fitness trainer, moved first to Ikaria to find a good place to open a fitness club. Mandy joined him some months later during the summer of 2016. She had it in mind to enjoy a long and relaxed summer, but after two weeks at the beach she got bored and she started  looking for a job.

She found one as a waitress in the small restaurant “Pergialidi” in Mikro Livadi and a few months later, she got a chance to work for the local electricity company. This job was and is both a challenge and a blessing at the same time. 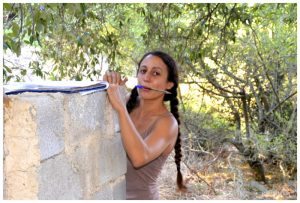 As Mandy has to read electricity meters all over Ikaria, she literally got to know every single house, church and dwelling on the island. This was a good introduction for a newcomer to get some orientation on an island where houses are hidden in valleys since the age of piracy. The electricity company literally threw her into cold water, only giving her some printed papers with the reference numbers of the electricity meters and the names of the house owners.

Mandy points at her hiking boots with a big smile as she talks about her trials and errors to find the right paths to the hidden houses up in the mountains. At that time, ‘Google maps’ became her best friend, but little by little she got used to the rough landscape, remembering the location of the different houses which are not accessible by car.

She now loves the job, because it is not only a good daily exercise in hiking, no matter what the weather may be like, but also in getting to know all kinds of people. Most of the time they are welcoming, offering food and water, happy to have a little chat. But very often Mandy has to deny the offer, because her time schedule is tight. As she has to read the electricity meters every 3 months, she has to run the mountains to keep up with her schedule. 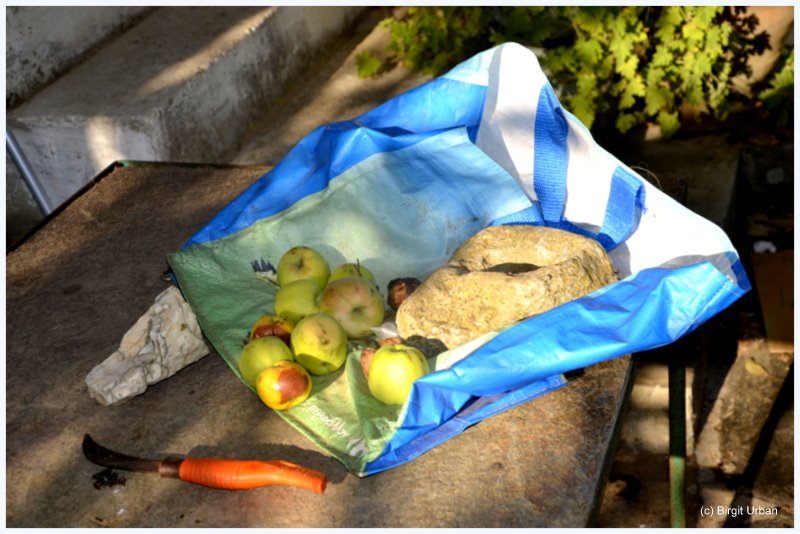 Since recently starting her job at the airport check-in counter, she has to organize her daily routine very carefully. Most of the time she works for 8 hours at the airport, before she puts on her hiking boots to do another 2 to 3 hours shift for the electricity company. During the summer, it is nice to wander through the countryside and evening sun, but in winter she has to rush if she doesn’t want to do all the readings with the light of her torch.

With a daily routine like this, there is not much space for other activities. But Mandy doesn’t mind. She enjoys the company of Sideris, who has found his rythm on the island, too, and the evenings out with some friends. Her greatest pleasure is to invite them for a drink, because with her two jobs she’s now financially able to make it happen from time to time.

When asked whether she misses her life in Athens, Mandy shakes her head categorically. “Not at all” is the answer. Maybe her family, but there is time for visits. Perhaps sometimes going to the cinema, but this is not such a big issue, because there is Netflix. For her it is more important to now live a more balanced life. She doesn’t have to switch on the TV in order to know the weather forecast. On Ikaria she just steps out of the door and she knows.

She loves to be surrounded by nature; the sea and the mountains keep her in balance. Here she can literally breathe… taking spontaneously a deep breath of fresh air, letting her eyes travel over the sea in front of her. At the moment she has no regrets for leaving Athens behind her. Ikaria is feeding her, even though Mandy is well aware of the changes happening on the island.

She understands that tourism during the summer forms a basis for an income on Ikaria; nevertheless she is concerned about the environmental impact of the mass tourism that’s currently happening between July and September. “Perhaps Ikaria should change its image of a panigyri and longevity island” in order to develop a more sustainable tourism strategy that accepts and protects the uniqueness of the Ikarian landscape, but ….” she is sighing, “things are developing very slowly on Ikaria, but perhaps, we –  the young people – can contribute to make these things happen”

Indeed, this is a subject she is discussing very often with her friends and she is trying to be consistent with it herself in her everyday life, e.g. by supporting environmental activities on the island. She knows it it will take time, but her former life has taught her that persistence and living by example are good instruments to encourage people. Perhaps one day Mandy will find a way to adapt the “advisory programme” she worked with at the Greek-American School in Athens to the Ikarian situation. Perhaps she should give it a second thought. She will think about it next time, when she climbs up the mountain to read the electricity meter at a remote house. 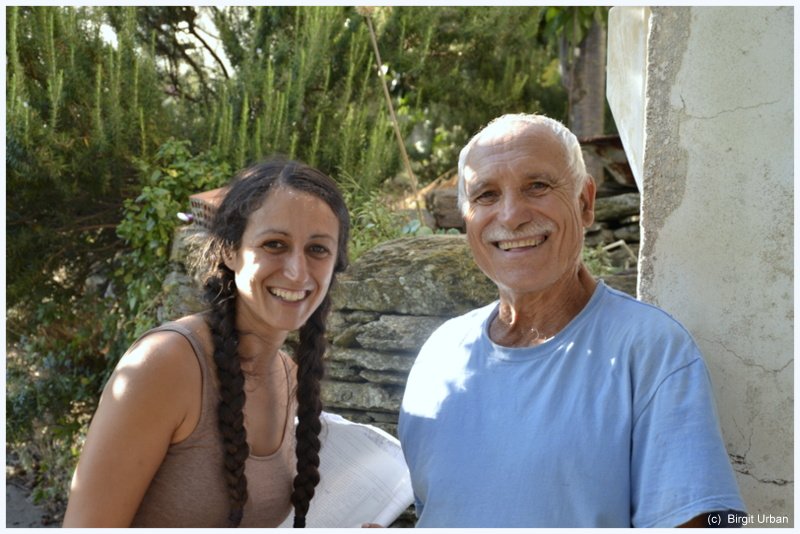