Marianna Markaki: when living next to the sea is the only option

If you want to get to know to Marianna, you better put your swimsuit on, take your swimming goggles and head to the sea somewhere in the area between Agios Kirikos and Therma on the Southern coast of Ikaria. Watch out carefully and if you‘re lucky, you might see a tall, sportive-looking woman with a spear gun, swimming between the rocks trying to catch some fish for dinner.  So put on your mask and your flippers and join her in the water. 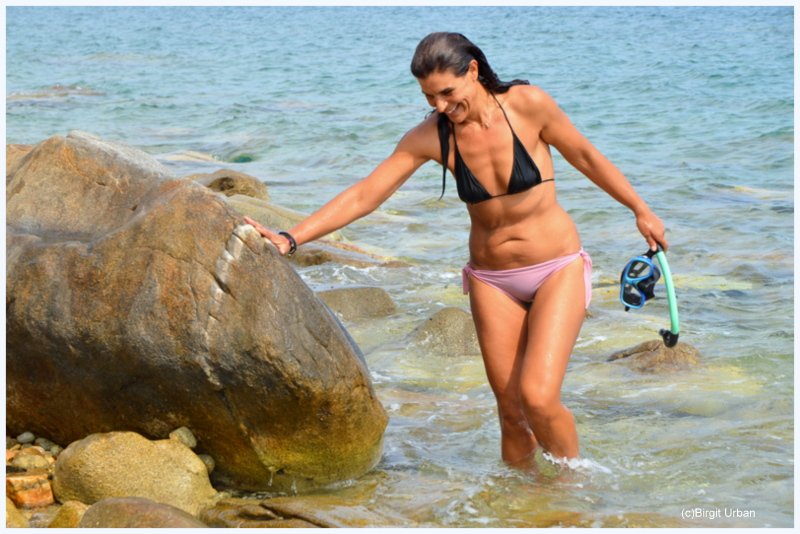 Marianna in the sea – favorite time of the day

As the sea is her element, she will welcome you with a broad smile that brightens her typically Ikarian face, shaped by her dark hair, strong eye-brows and dark skin. Most probably she will invite you to join her for a swim and if you are into it, you will learn about the hidden caves in the rocks along the seaside. 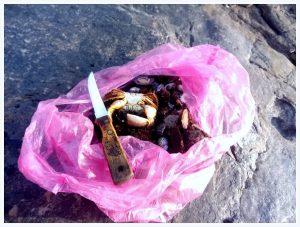 But she will also introduce you  to her underwater paradise by guiding you carefully through the rocks. With her, you are in good hands to explore some rare fish, baby octopus or sea shells, because she knows  all the hidden places in this area. But she will also teach you how to take care of the sea by cleaning it up from rubbish and plastics.

Following her around, you will easily understand why Marianna’s second name is „mermaid“ and that living in the sea is kind of natural to her. When you finally end up on dry ground again, Marianna will switch from flippers to hiking boots and off you are for a hike in the mountains.

She grew up in this area between the sea, the mountains and the sky and since childhood she has loved outdoors adventures. So quite naturally she has become a dedicated and curious explorer of this place. 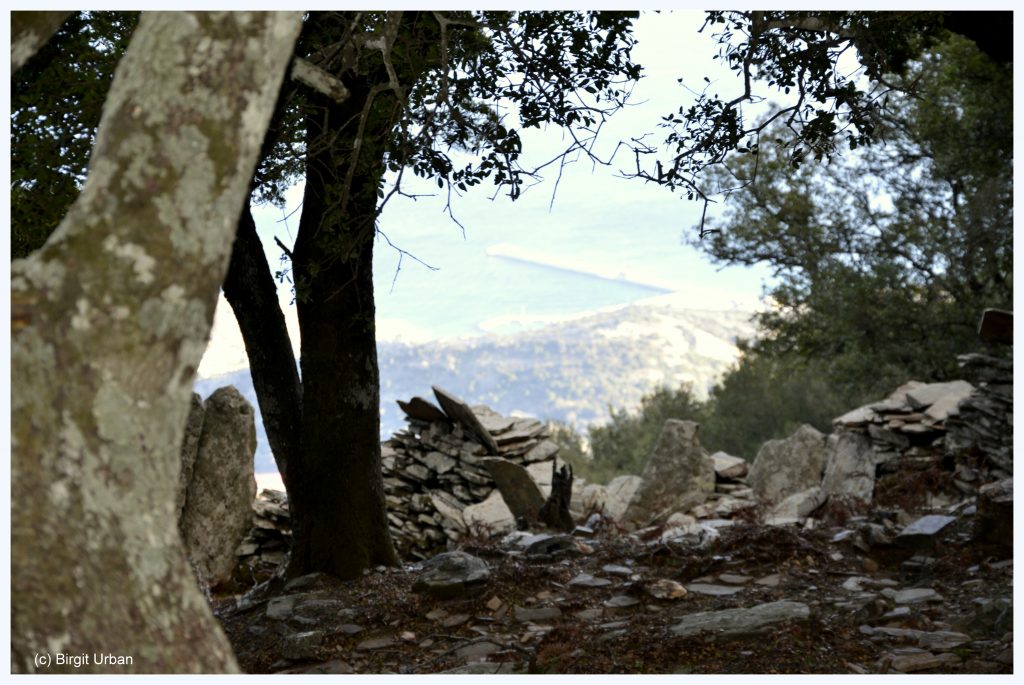 Favorite place in the mountains

It would happen that her mother didn‘t see her for hours on end: Marianna might have picked her back-pack, some nuts, water and her pocket knife to hike by herself through  the bushes alongside the little creeks in the nearby mountains. Sometimes she just prefered being alone to the busy company of her playmates. On her hikes, it helped that at the time when she was little, the children were mostly out in the fields with their parents and grandparents. Instead of playing with all kind of plastic toys, Marianna learned about herbs and plants in the fields and on the mountain trails in different seasons and how to pick them and use them for different purposes.

So while strolling alongside her, you get a good lecture on herbal medicine and traditional Ikarian recipies. 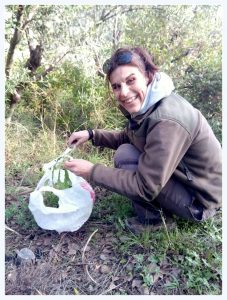 And if Marianna is in a good mood, she may share with you some childhood memories. With a twinkle in her eye, she will recall the stories when she tried out new games with her brother and the kids from the neighbourhood. Some of these adventures were pretty risky and may have ended up in a broken arm or leg. Now that you get to know to Marianna a bit better, you understand that these experiences didn‘t really stop her going on.  Even though she had to leave the island at the age of eight to live in Athens, she didn’t turn into a city girl. The sea, the mountains, nature and sports remained her elements. So she continued with all sorts of sports, like martial arts, horse riding, running and swimming marathons, especially during her summer holidays on Ikaria. This perseverance also helped her in her working life. After high school she went to a business school in Kalamata; she lived in Volos for a while and returned to Athens to work different jobs. She made a living, but it was difficult.

When at the beginning of the Greek economical and financial crisis she also had to face a private one, she decided to come back to Ikaria. She found jobs in various fields and she was not too picky in order to make a living and to be independent. So she worked in bars, restaurants or as a tourist guide and she also learned how to make bread in a bakery store in Agios Kirikos. 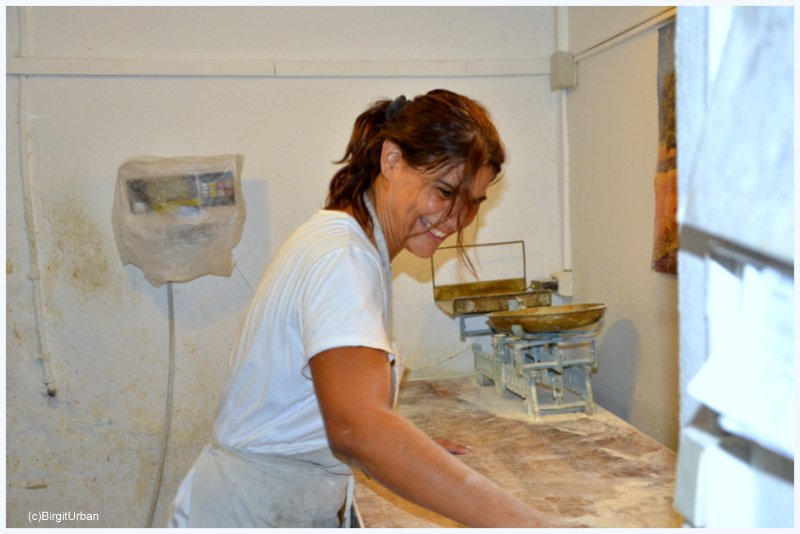 Marianna working at the bakery store

Despite the unsteady jobs and the difficult winters on Ikaria, Marianna is determined to stay. The financial crisis crisis prevents her from travelling, but to balance her energies she could easily build on her childhood activities, like swimming and hiking.  Another reason to stay is obviously the radio station „Ikariaki Radiofonia“. 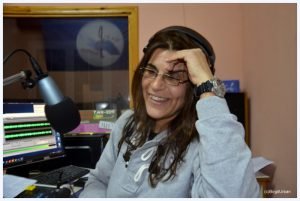 Marianna at the radio station

For the past seven years she‘s‚on air‘ every Wednesday evening, taking fans through the night with her exquisite music taste. This volunteer work offers her the possibility to share her world of music with a growing community on Ikaria and beyond. 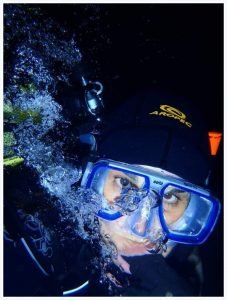 But her sea world is also expanding. Due to further maritime developments on the island, Marianna was one of the first Ikarians to join the new sailing club NOI and to get her sailing certificate. And in addition to this, she is now also a dedicated scuba-diver with the aim to become a scuba diving master and instructor as well as a rescue diver.

Little by little the bits and pieces of her different passions fit together: the love for nature – especially for the sea – is leading her to new perspectives and a sound knowledge about the sea. You can also say it in a different way: Ikaria probably helped her to find her true purpose …