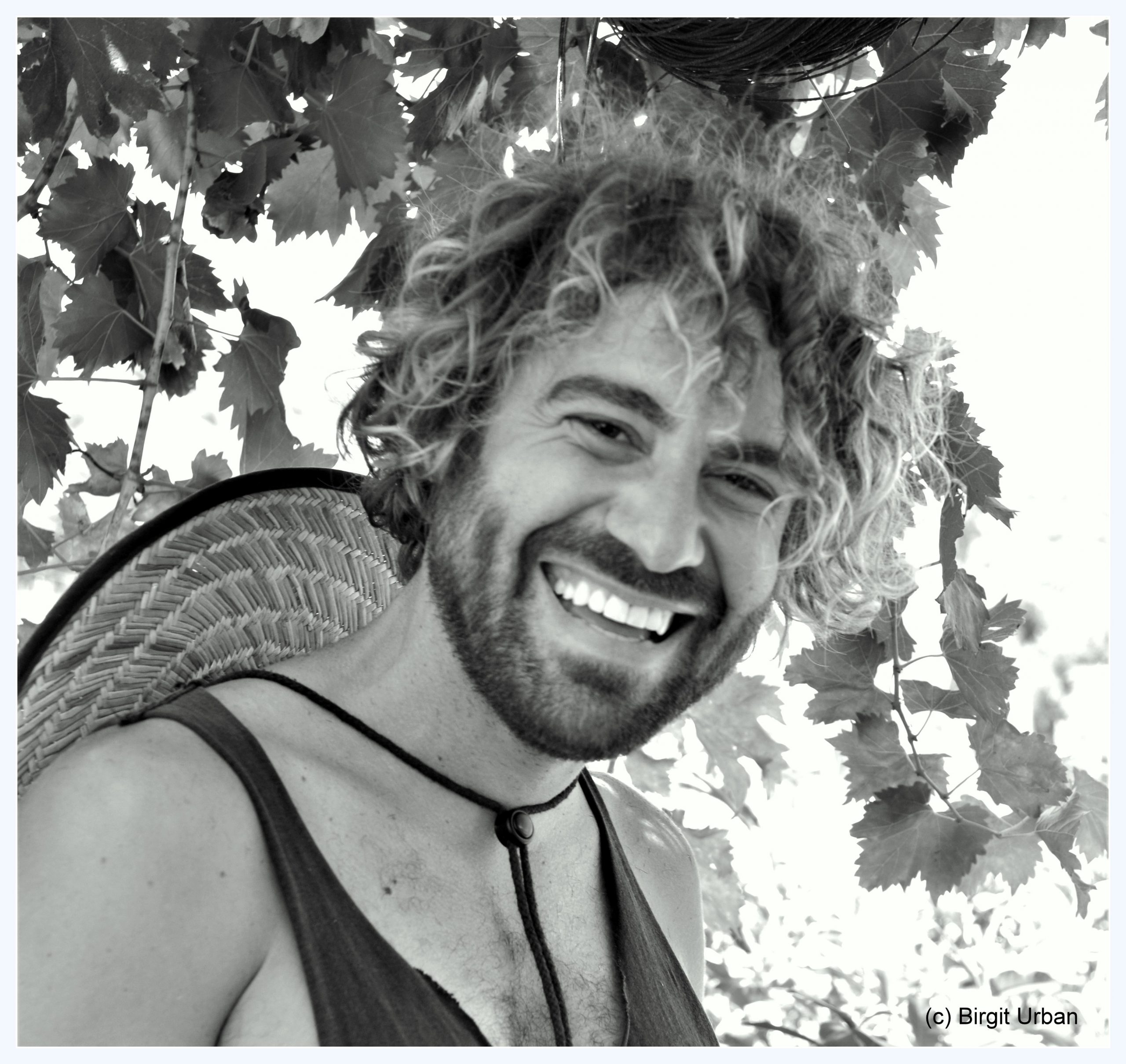 Nikos is pushing the old straw hat onto his neck, wiping the sweat off his forehead. Even though it is barely 8 a.m., he is already sweating a lot and his back is starting to hurt. For nearly one and half hours now he has been bending up and down and there is still some work to do. It is good exercise – no need for a fitness-club here.

Nikos is standing in the middle of his field of courgettes near Kambos, cutting carefully the ripe vegetables and placing them in the big basket at his side. 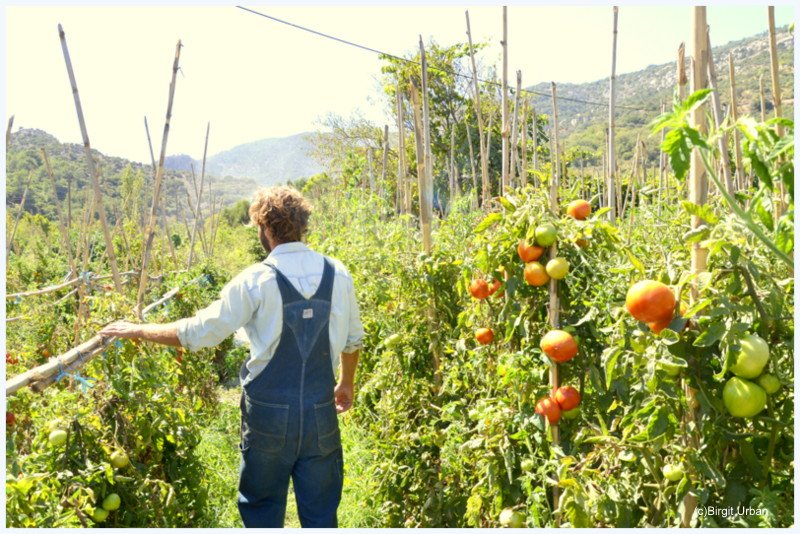 Nikos in his fields

Harvesting tomatoes, peppers, courgettes and cucumbers in July and August on Ikaria is an exhausting job. Not only because he can finally pick the harvest from the seeds he had planted in the earth at the beginning of March, but also because it is the height of the tourist season and supermarkets and restaurants are demanding large amounts of high-quality vegetables from him. 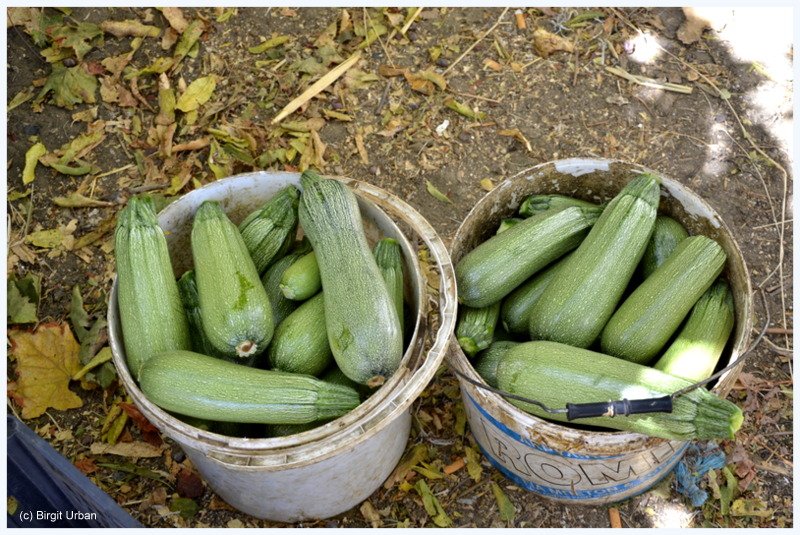 Vegetables – locally grown and ready for your dinner table

In his head, Nikos is quickly going through today’s schedule. Even though it is said that Ikarians are laid-back people, not worrying about time-schedules, Nikos has to be very careful with his time-management. Today, so many things are on his list: after finishing the harvest in this field, he has to take tomatoes, potatoes and aubergines to the restaurants and supermarkets in Agios Kirikos and Therma. This means he has to drive his pick-up over the mountain again, up and down the bendy road connecting the village of Kambos, lying in the northern part of Ikaria, with the southern side, where Agios Kirikos is located. One trip may last about an hour, depending on the traffic on the road. For locals, August is a nightmare to travel back and forth on the narrow roads on this rocky island. Too many tourists in rental cars do not know how to handle tight bends. So Nikos will need patience and sangfroid to transport his precious vegetables from one village to another.  But he is looking forward to it, especially to the stop in Therma, where his aunt runs a kafenion in the platia. He hopes to spend some time there, just to get a coffee and a little mezze. This will be enough to fill up batteries and continue along the road. 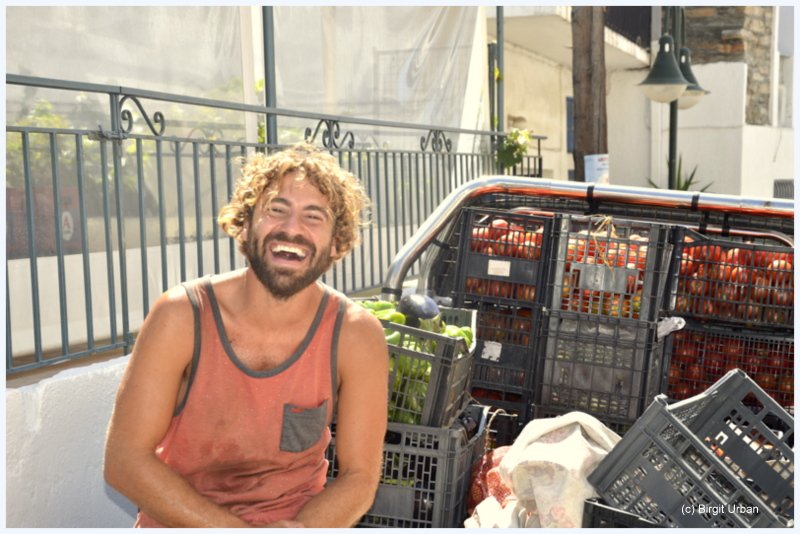 After Therma he has to return to his other fields in the area of Maratho, where is also growing tomatoes and other crops. Nikos is a bit worried about the tomato harvest there: some plants don’t seem to be healthy. Perhaps he should consult Thanassis, the plant specialist in Agios Polikarpos and invite him to the field? But where would he find the time for a meeting? In Maratho he has to harvest too, and most probably he will have about 100 kg of tomatoes –  an average daily harvest –  but it has to be carefully packed, because he can’t take it to Armenistis and Evdilos on the northern part of the island until tomorrow. In Armenistis they have also ordered a sizeable quantity of aubergines, so this has to be organised, too.

While thinking about all these organisational questions, Nikos can already feel the tiredness in his bones. How is he going to make it through the day? Besides harvesting and delivering his vegetables, he has to look after his 15 cows and goats, feeding them, fixing the fences on the land so that they cannot escape, patching up the grass in the fields around his land. And, last but not least, his grandfather is waiting for him to be taken to the field so that he can help him a bit with fixing and watering the tomato plants.

Niko takes a deep breath, sipping at his “cafe freddo”. Somehow he will manage. There is no need to hurry, slowly, slowly he will make his way through the day. Before climbing into the pick-up he takes a look around his fields. What a pleasure to see how nicely the red tomatoes shine in the sun! A broad and happy smile comes over his face while he thinks about a brief conversation he just had a couple of days ago in Therma. A lady turned to him, saying: “Are you the young Nikos from Kambos? Are you the one who brings tomatoes to the kafenion? You know what? Your tomatoes brought back the taste of the Ikaria of my childhood. This is how tomatoes should taste. Thank you for this pleasure”. This little encounter summed up all his reasons why he had decided to become a farmer on his grandfather’s land, leaving his Athenian life-style behind. There is nothing more to say as to why he gave up his job as a referee and his additional work as a waiter in several restaurants. He had a decent income, with friends and family around. But one day, when he was helping his grandfather in the fields up there in Kambos, he could no longer see a reason to leave the island. So he decided to stay. There was nothing to lose.

Ever since his childhood, he had been travelling forwards and backwards between Ikaria and Athens, working side by side with his grandfather during the holidays. He was always eager to learn about the cultivation of plants, collecting seeds and using them again. So it was quite natural that after all those years, he had a good knowledge of farming, even though he had never attended any agricultural courses. Nikos still considers the knowledge of his grandfather and other elderly Ikarians as the best lessons he could possibly get. 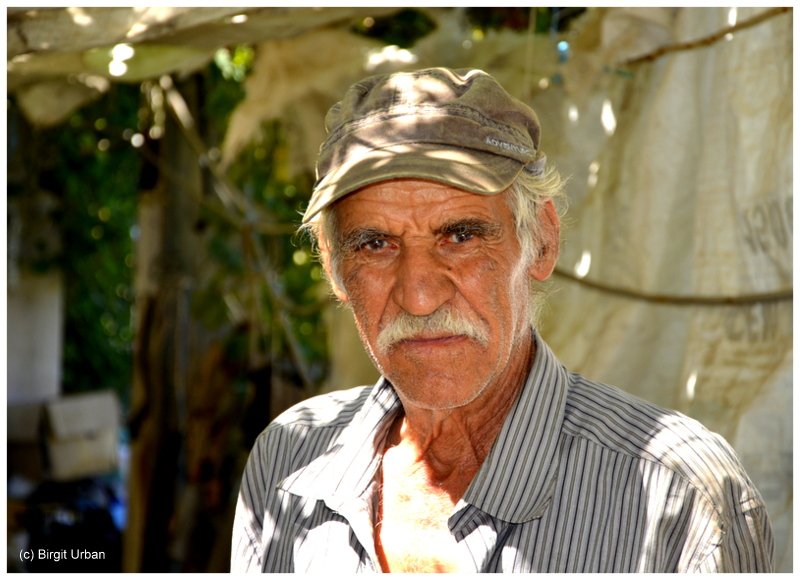 But when it comes to the future of farming on Ikaria, new ideas should be added. In the general discussion about the future development of Ikaria, sustainable farming is a key element for Nikos. According to him, Ikaria is a good basis for the local production of high-quality fruit and vegetables. Yes, it is hard work; yes, you get your hands dirty, but the reward is worth all the effort: tasty and healthy food, food that has nothing to do with the processed food packets you can buy in the supermarkets on the island. This is a treasure and a perspective that Ikaria could offer to the younger generation.

While talking about these ideas, Nikos sighs. Sometimes it is a bit difficult to convince others that the Ikarian earth under your fingernails is a good sign, because while you are working on the good taste of a tomato, you do not only give your energy to this tiny little fruit, but you make an effort to change the existing food chain and its quality. You can call it revolutionary work to change the world, if you like. Somehow the thought that he is transforming the cultural heritage of his ancestors, who have worked the earth of this field for generations, into a perspective for his own life gives Nikos the energy he needs to make it through the day.

Picking vegetables in the morning hours in Kambos

While turning on the engine of his pick-up, he knows: slowly, slowly, he will drive up and down the roads to make the deliveries. He will not give up on his conviction: he is meant to work in this field near to Kambos. The dirt on his hands is his daily reminder that he will manage. Somehow. And then there is the prospect that later in the week he can just jump on his surfboard at Messakti beach … switch off from farming, just concentrate on the beauty of the sea. Isn’t that a great thing to look forward to? Nikos puts the pick-up back on the dirt road. What a wonderful day this is going to be!

Niko after his ‘time-out’ at Messakti beach