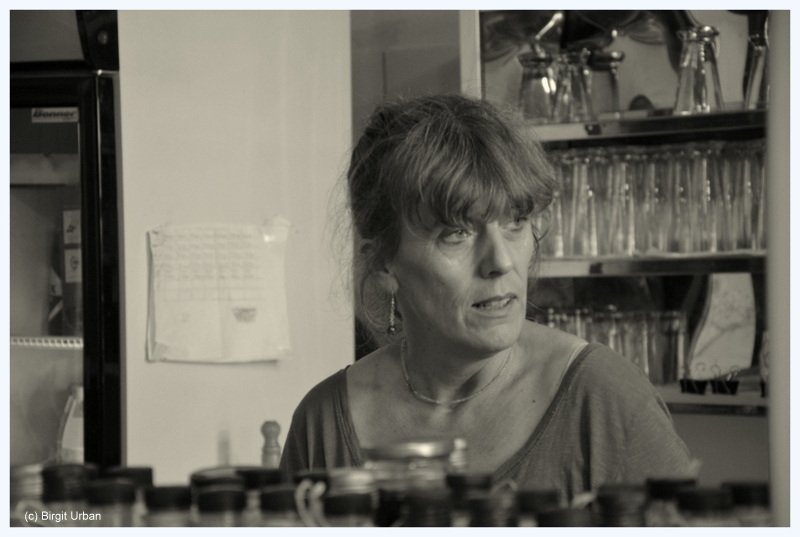 Silke Wagner – When love and jam make you stay

“Ja, da muscht halt gucke, dass du noch eine Milch holen tust” You may turn your head in surprise, eyes wide open, perplexed to hear a broad German accent while sitting in a coffee shop in Raches on Ikaria. But when this is happening, you are most probably sitting in the coffee shop of the “Women’s cooperative” in the middle of the platia of Christos Raches 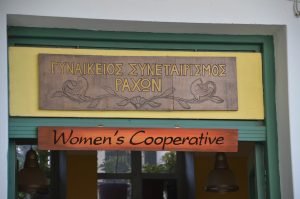 … and Silke, who just got your attention, might be running around, preparing coffees, cutting cakes and selling home-made jams and chutneys to customers queing up in front of her cash register . It is mid August, peak tourist season and there is a constant flow of people coming to the platia at nearly every time of the day. 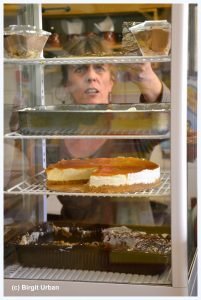 Silke and the cakes

Silke is juggling with the orders and questions in different languages: in Greek with her colleagues in the kitchen, in English and German with the tourists. And even during stressful moments she patiently answers the same question: “How does it come that a German is working in a Women’s cooperative in the mountains of Ikaria?” She might take a deep breath, taking out her tobacco to roll a cigarette. This is her time of reflection: how to make a long story short? In a nutshell the answer might be: it had been her love for a goat keeper from Raches that made her stay. And what will follow may not be a modern fairy tale, but a story about love, commitment and dedication to make a life on a remote island, where she had to learn everything from scratch. 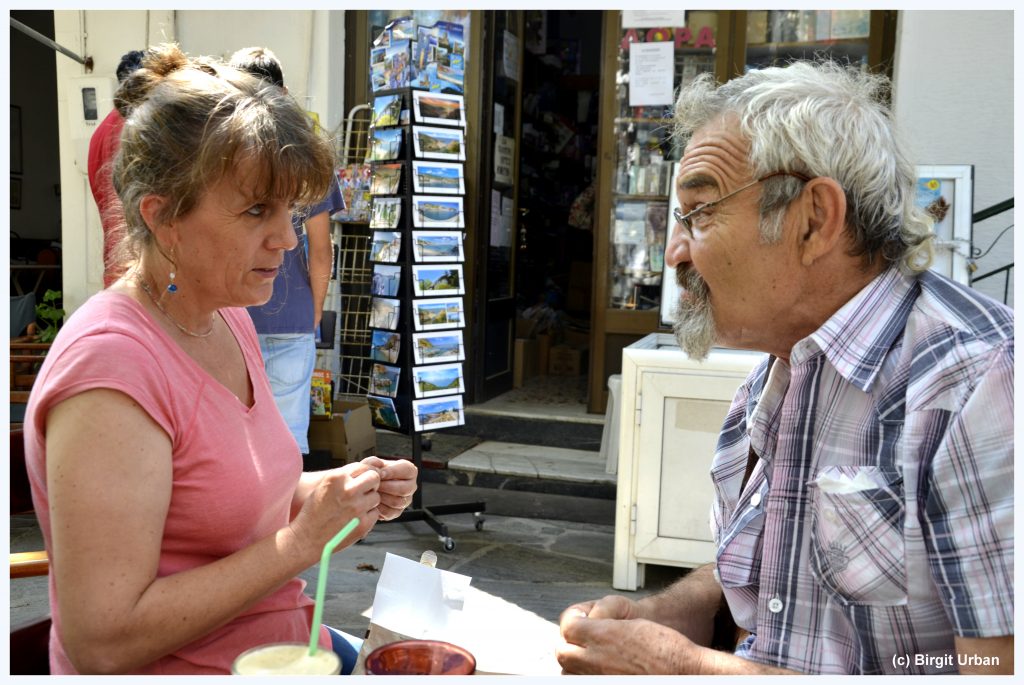 Silke has time for a little chat with Elias

Silke is coming from the South-Western part of Germany, where she had been working in a kindergarten. She always liked travelling. In 1995 she took a sabbatical, because she needed some “fresh air” to get her motivation back for her job and her life again. Taking off was not an easy decision, but she was promised her job back after a year, which gave her some sense of security. So she packed her backpack, destination: Africa. On her way down there, she wanted to pay a visit to Ikaria again, an island she got to know some years before. And there it happened:  in the night club “Kashmir”, famous at that time, she met Adonis, a young goat keeper from Christos Raches. Communication was difficult, because they did not have a common language to talk to each other. There was no Google Translate at the time, so they had to look for words in an ordinary dictionary and to write them down on paper. But somehow they managed. They were both dedicated and little by little Silke found her way into the Greek language. 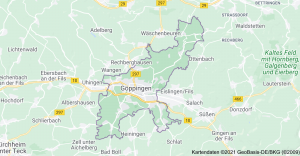 And after a while she decided to stay. She returned to Germany to quit her job for good; her parents were not happy to let her daughter go to a far away island in the Eastern Aegean, but they were supporting her in making her dream come true. Silke is rolling another cigarette, before she recalls her memories of her first year on the island. Summer season was good. She had a job in a taverna in Nas, earning some money. But winter was a different story. The island was empty and silent, only locals were living in the neighbourhood. Besides going to the coffee shop or visiting some neighbours, there was not much distraction around. Of course Silke was helping Adonis with the goats, she learned how to milk them and to make cheese. But apart from that, nothing was really happening. 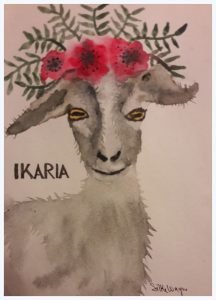 Postcard made by Silke

Nevertheless, there was never a moment when Silke wanted to give up and return to Germany. There was not much to be missed from her former life. Perhaps the black bread, but she found a solution by baking it herself.

Over the years Silke adapted to the rhythm of the island. She grew a family and when they moved into their in-laws’ house, she started growing vegetables and fruits. 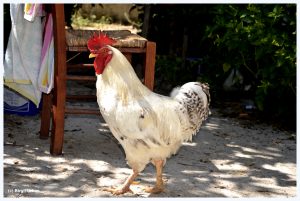 The rooster in Silke’s garden

Chicken, cats and a dog joined in and today she lives her most precious moments, while sitting in the shadow of an old tree in front of her house. She likes to listen to the silence at night or early in the morning. This is her shelter, here she can breathe.

Silke in her garden

She does need it to refill her batteries in order to handle everyday life. And in the meantime she enjoys the quiet winter times on Ikaria much more than summer.

When you ask Silke about the biggest challenges she had to face during the last 20 years, her answer is very prompt and direct: “Building up the Women’s Cooperative” and “to go through the economic and financial crisis Greece has been facing for nearly 10 years now.” While saying this, Silke will show you around the coffee shop of the Women’s cooperative you’re sitting in, telling you the story behind the jars of jam on the shelves and the tasty cakes in the refrigerator. 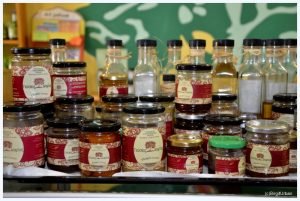 Jams made by the Women’s cooperative

“This all started with the crazy idea of 6 women. We were mainly friends, having known each other for years. We all came from different backgrounds. Women from Ikaria, but also foreigners like me. For example Gabi, who is from Northern Italy and who got stranded on Ikaria with her Greek husband. We were all a bit tired of having work only during the summer time. We needed a job and an income in the winter. So the idea came up to produce jams and chutneys from the fruits and vegetables we were growing in our gardens and to open a shop to sell them together. 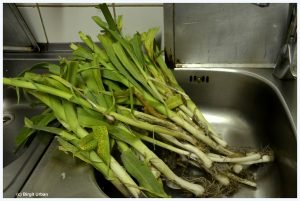 We are all dedicated to organic farming. And we did not only want to preserve good quality food but also the traditional recipes of the island. Over the years we had seen that Ikarians themselves had become very fond of processed foods they could buy in the supermarket. They learned it from the tourists and from family members living abroad. We saw and we see it as a danger for our island. Farmers are using more and more pesticides to grow more vegetables and fruits to respond to the changing demands of Ikarians and tourists. This is destroying our natural environment and our water. On an island you have to take good care of what you have, because this is the only soil you can live from. 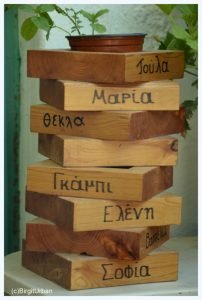 These women are the cooperative

But there was a long way to go from idea to reality. We had to find solutions and answers to many questions: which legal entity? How to get the money for the shop? How could we work together? In the end, the cooperative was the best answer to all these questions. But when we opened our first little shop, we had to face a lot of scepticism from our neighbourhood.  Raches already has the reputation that its people are very special. They are mountaineers, what do you expect? But in our case they were very suspicious. What are these women doing? And especially: “what are these foreigners doing here? “

Silke smiles when she summarises all these discussions that happened years ago. She is pointing to the different tables: “And today, you see, our hardest critics are all coming to our place, enjoying our cakes and pies. Finally, we were able to convince them with the good quality of our products, the philosophy of our production and our stubbornness of not giving up.” 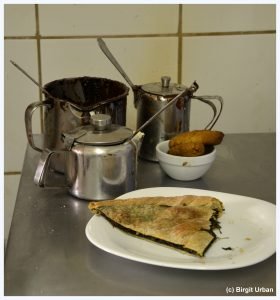 The delicous pies from the Women’s cooperative

Just to the contrary. The Women’s cooperative is even planning to expand its workshop. The idea behind is to enlarge the network with the local organic producers and to enhance organic farming on the island. During the crisis, many people left the island, especially the younger generation. For Silke this is the biggest challenge for the economic and social development of the island. “When there is no hope for young people to stay, we are lost”, she says, knowing that perhaps also her two daughters may not live their lives on the island. But Silke and her fellow women in the cooperative did not stand up all these years to be knocked down by today’s crisis. She sees a future for Ikaria with a more sustainable development in farming and more respectful tourism development. And in this context Silke will dedicate her energy to the Women’s cooperative also in the future. 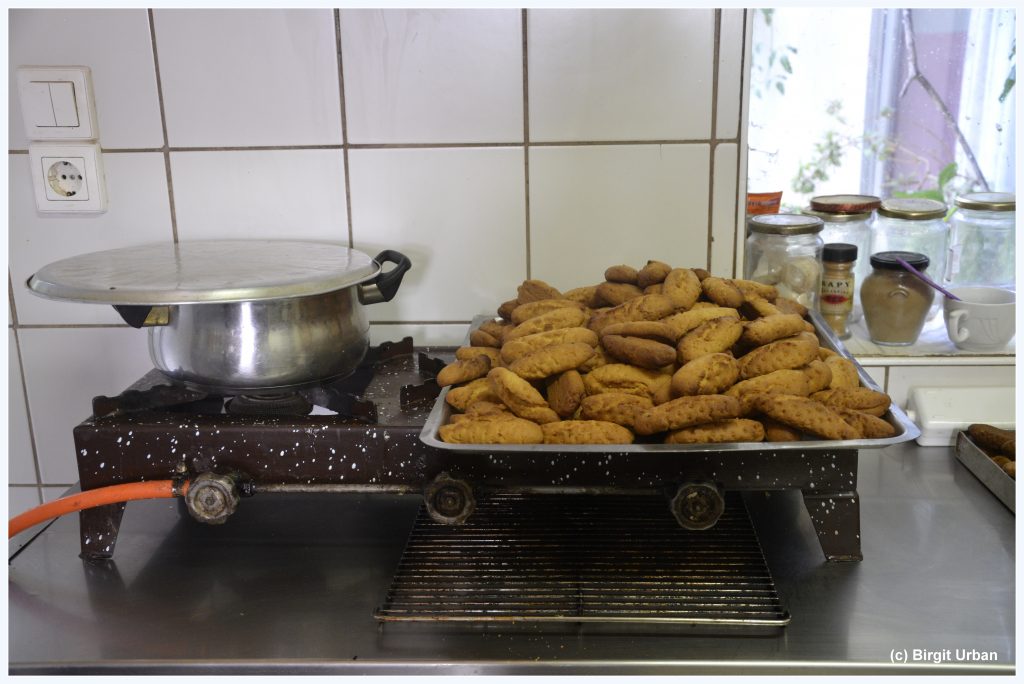 Biscuits made by the women

“Crisis is also a chance for a change”, she says, “we can make it happen. When we have a chance to produce and sell more of our products, we will be able to pay our farmers correctly. We will be able to create jobs – not only in our kafenion, but also on the farms. Our hope is to contribute to the revitalization of the local economy by giving an example that young people as well can find a perspective on the island, by preserving traditions, caring for the environment but nevertheless meeting the needs of a modern society. Good quality of food will never become old fashioned. And if we keep the old and true Ikarian spirit of “Oli mazi” (“we stand together”) I am convinced that this place has a chance. But … it will take some time”. In the meantime – as a result of the crisis – Silke herself has to leave the island for the winter months. She will return to Germany to take up different jobs to pay the bills for the family. 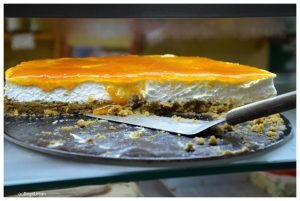 Her hope is that this will not happen every year and that in the very near future she will spend the winter months in the new kitchen of the “Women’s cooperative”, preparing jams with the fruit from the Ikarian land. 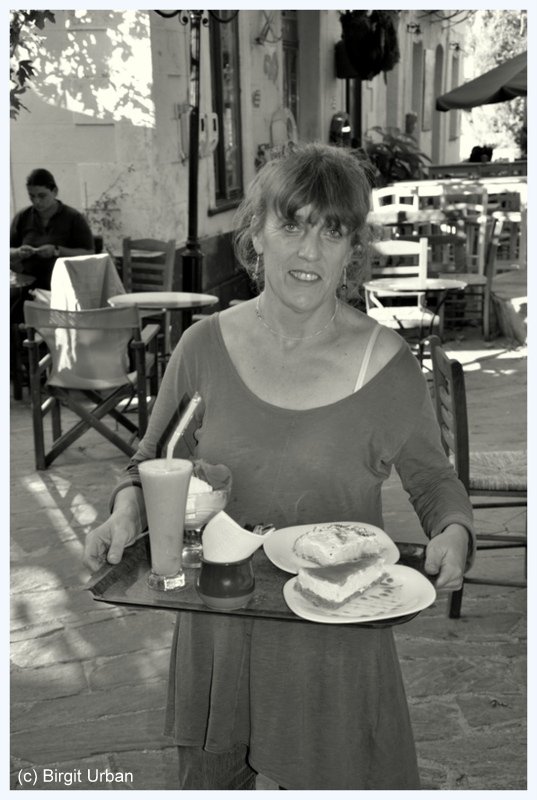 Silke during summer in the platia of Christos Raches