A Sunday afternoon in late July on Ikaria.  35° degrees, the heat is vibrating in the air. But Sofia does not care. She has parked her car on the road high up in the mountains between Karavostamo and Miliopo and is watching the mountainous area around her.

She is on guard duty today. It is her shift and for the next 8 hours she will observe every movement in her surroundings. From time to time she will change position, but her eyes will be nailed to the rocks, bushes and paths that form the typical landscape in this part of the island.

Sofia can be seen from far. With her red T-shirt, black trousers and her long black hair blowing in the wind she is quickly recognized by many who are passing by.

Sofia is a member of the volunteer firefighters of Agios Kirikos and well appreciated among the villagers, not only because she dedicates her spare time on a hot summer week-end to scan the landscape around her for the smallest sign of a fire, but also because she has been doing this voluntary work already for more than 13 years. Why does a woman opt for this kind of volunteer engagement, while so many other – easier to choose – offers are around?  When asked this question, Sofia does not need another second to answer. She promptly lets you know: “Because I love my island and I want to protect it.” This could be done in an easier way, for sure, but for Sofia being a volunteer firefighter is the best option to do it. Her cautionabout the vulnerability of her island was the big fire in the Southern part of Ikaria, in the area of Glaredo, in 1993. With the extreme heat and the wind, houses, lifestock and landscape were destroyed within hours, leaving 13 dead behind. The Ikarians were traumatized and upset, and Sofia was among a group of younger people who wanted to do something –  something to prevent fires like this in the future,  something to protect their homeland.
The idea was born to create an association of volunteer firefighters. That way, volunteers could learn how to prevent and extinguish forest fires and to do many other things to protect the environment they love. But it was a difficult task. There was no funding around and everything had to be based on donations. It took a while to form an official association, but they succeeded and finally in 2008 the first association of volunteer firefighters on Ikaria was created, covering the whole of the island.

Sofia and her sister Spiridoula were amongst the first women to join. Spiridoula even became member of the management board and was eager to organize the necessary equipment  – clothes, shoes, technical equipment – by writing endless letters to other organisations, asking for support. Also the first training sessions took place and  – as Sofia and Spiridoula wanted to work as firefighters , too – they followed the same training as their fellow-men.

Of course, it was tough, of course they were afraid when they were called for their first assignement in the fire. But they were trained and did not think about the danger. Shaking and rational reflection came later. “In the fire you don’t think twice”, says Sofia. “You do what you have learned to do, you follow your instinct. In the fire you protect yourself and you take care of the others. In a fire you can only survive as a group.”  Over the last years, Sofia has faced multiple difficult situations. But her good instinct, her sharp eyes, which can even discover tiny spots in the far distance, her good knowledge of the landscape and her determination to protect the natural environment of the island are the driving energies that let her go on. However, the ongoing struggle to have the appropriate equipment and protection is still causing frustration.  Over the years, the volunteer firefighters still depend on donations to cover the costs of the necessary equipment and the maintenance of their fire trucks.

They are doing their best, and sometimes it seems that jumping into one of the old fire engines causes more fear than going into the fire itself. And of course the summer season, with its endless flood of tourists, lack of water, dried grass and too much garbage around, puts the firefighters on high alert, causing stress, not really giving them time to enjoy the beach. These may be moments when Sofia wants to give up, because sometimes it is difficult to digest the frustration about the careless attitude of so many people around, people who are throwing away glass bottles, knowing that their splinters may cause fire in the dry grass, knowing that free camping and lighting campfires to cook could easily destroy the landscape around them.  Yes, in moments like these, when being a volunteer firefighter feels more like being a babysitter for ignorant people, it is understandable that doubts about her engagement for this island are coming up.

But Sofia remains focused on her task. Last year, in August 2020, at the fire in Monokambi, she was one of the first ones to be on the spot.

For 3 days she did not return home, burning two pairs of her own shoes in the fire. But Sofia does not care. The most important thing was that the fire did not spread out and that in the end they could safe the Ikarians from further harm. This is her motivation. This is why she‘s spending her spare time up in the mountains, while others are enjoying a careless time with friends and family at the beach at Messakti. Up there, alone, not paid for these hours on guard, she carefully observes the landscape, enjoying the silence at night. Again she is leaving her son with her parents and she appreciates a lot the support that her family is giving so that she can do this volunteer work.

Because this is her place and it is up here on this road, where she has parked her car, that she knows that she will never give up doing her utmost to protect this rugged island from further harm … even if this means that she has to burn another pair of shoes in a forest fire. 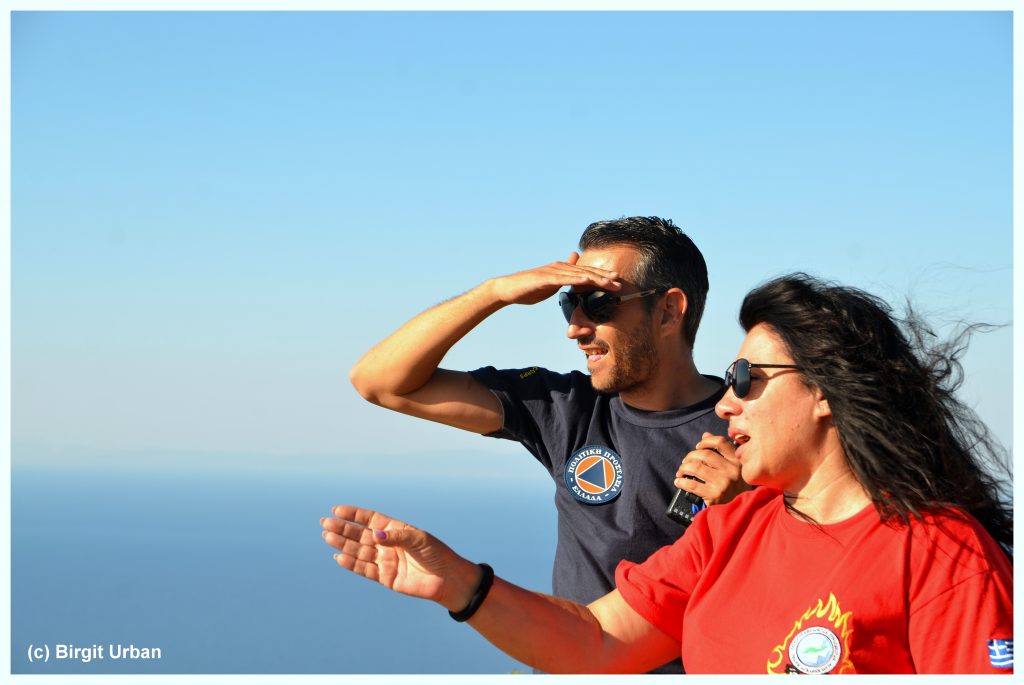