Stamatis…leaving an empty chair in the platia

I‘m coming down to the platia to have my morning coffee. At first sight everything seems to be the same. The sea greets me with its dark blue colour, in the kafenions people are ordering their coffee, first news are exchanged, motorcycles  are coming and going to take the coffees to different places. It looks the same, but from now on it will be different. Stamatis is missing. Stamatis Fokanios, the captain.  In the past, he was coming every morning from Therma, parking his little Jeep in the first row by the sea, taking his place in the kafenion, lightening his cigarette. 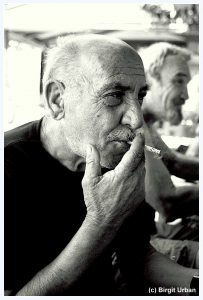 He never talked a lot, but his bright eyes were looking around with curiosity. He was a good listener, not necessarily for him to comment on everything. He had seen and lived a lot, he had exchanged enough words. So after he left the sea and the big boats, which he steered through the oceans for so many years, and had set foot on Ikaria again for good, Stamati was looking for a quiet life.

At home he had to deal with 4 women: his wife Evdokia and his three daughters: Koula, Maria and Angela. Good women, strong women. His wife was holding everything together when he was away, looking after the house and bringing up the kids. The daughters are doing well, building up their lives, so he was not worried about them. With this in mind, Stamati enjoyed his little morning coffee with his old friends. He had known some of them for so long that they could recall every tiny detail of the stories they lived together. So it was good to sit with these familiar faces, smoking cigarettes, watching people pass by, watching the fishermen coming in, talking about the weather. These are the ingredients of a good morning routine, a routine that is telling you, that life is going on with its familiar and slow rhythm. 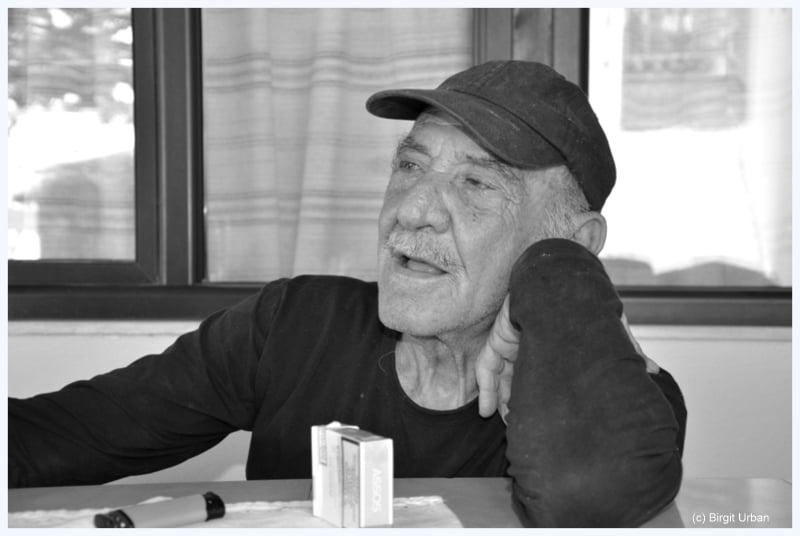 Stamatis at his house in Therma

When I got to know to him, I was fascinated by his bright eyes and his deep voice. We had a coffee and with my little Greek and his little English, we had good conversations. He knew that I‘m German, that I like the island and that I‘m visiting even during winter. This was enough to know. When asked who I was, he told the people „ she is German“, nodding his head as if he wanted to add „she is a good kid“. In winter times, we were the first ones on the platia and I loved to sit at his side, next to the little fireplace. I loved the way he was dressed for these occasions: old leather jacket, old cap, stubble beard , his trousers somehow tucked under his little belly. What a nice and warm company for the first morning coffee.

But last year he got sick. He was not longer able to drive by himself to the platia, but family members took him to the kafenion and put him into his favorite chair. He could still make it: his friends around him, his cigarettes and the coffee … all he needed to feel  alive.

Stamatis and his wife

But now his chair will remain empty. Some days ago, his friends and family gathered for the last time at the small church Agios Nikolaus in Agios Kirikos to accompany him on his last journey. Outside, the old men were whispering to each other. His old friend, Elias – o Farao –  leaned on his cane and looked out at the sea, not talking to anyone. In his thoughts he was travelling the seven seas again with Stamati, knowing that his old friend had to go on this trip on his own. 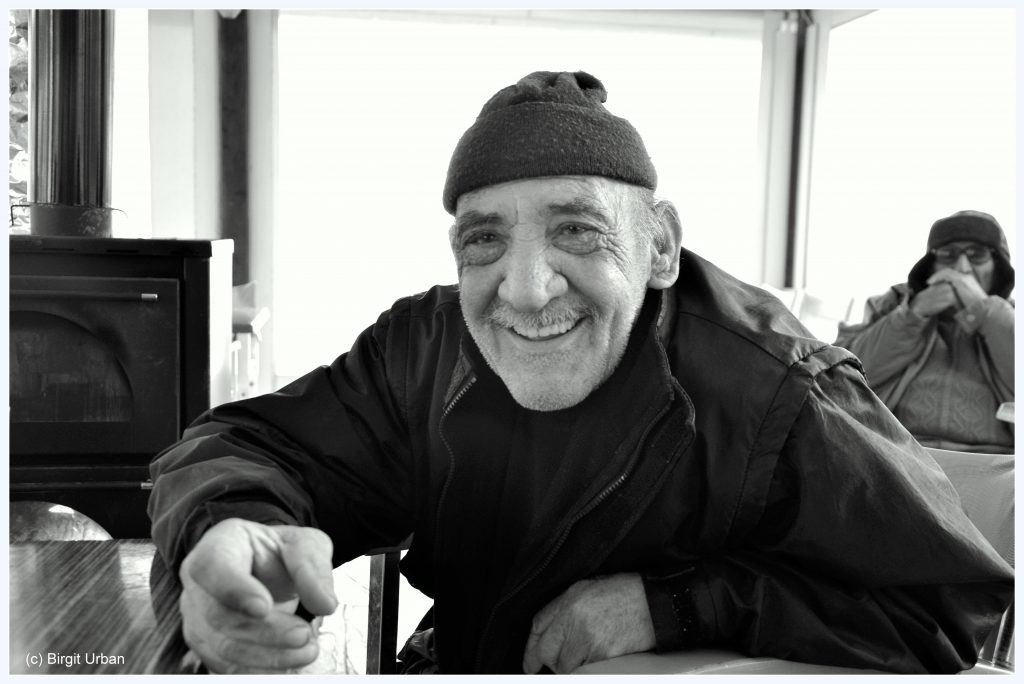 Stamatis in the kafenion