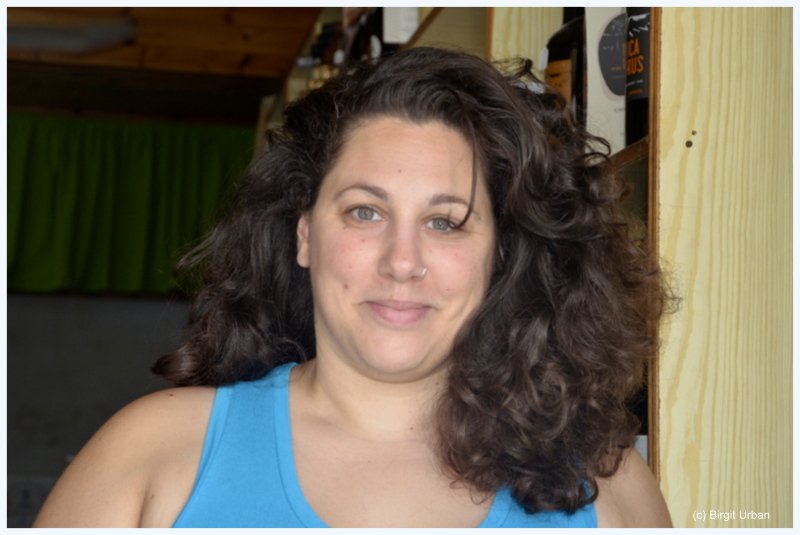 Stamatoula Vardarou: It takes a village to raise a kid

Stamatoula is hurring down the street in Agios Kirikos – a few strands of her thick curls come loose from her hair bun. She is late to open her shop and she knows that her neighbours will start worrying, if she is depassing even the Ikarian definition of beeing late. And she is right. While opening the door of her little shop in the upper main road of Agios Kirikos, Kosta, the owner of the coffee shop next to her, sticks his head out of the door asking her: „Where have you been? What happened? You are late!“ Stamatoula is smiling, telling him in detail the reasons for her delay: she was waiting for a package, that had arrived last night with the ferry boat. But at the post office, many people were waiting for their deliveries … so there was a lot of talking and exchanging news and no chance for Stamatoula to just grap her packages and to leave. But, she does not care. She loves this kind of rhythm and the caring aspect of the neighbourhood. She grew up with it, it is in her DNA – what can you do, when you grew up in a kafenion and nearly the whole village was taking care of you? 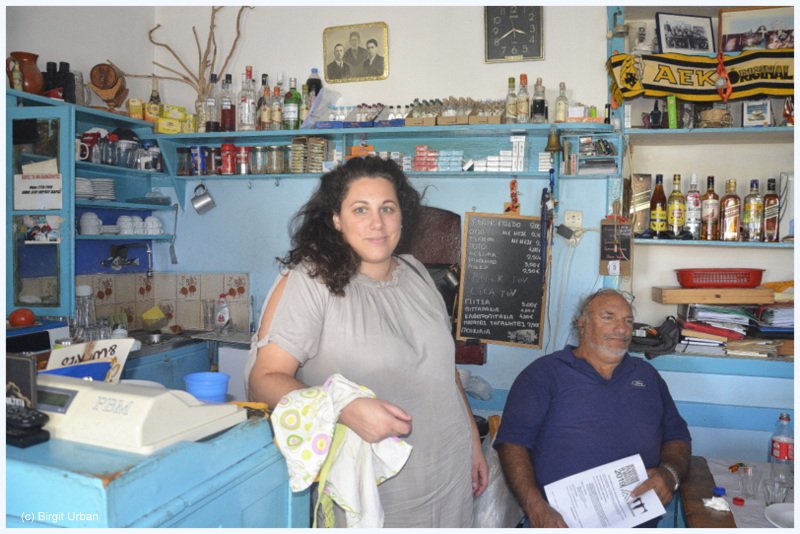 Stamatoula and her father in their kafenion in Plagia

Stamatoula is from Plagia, where her grandparents were running one of the two kafenions of the village.  Stamatoula, her parents and her brothers lived upstairs, so the kafenion was a kind of external living room for them and people in there extended family. Everybody was looking after her, when her mother was busy in helping her parents in the kafenion. So in its very sense – it was the village, who educated her. Stamatoula loved the freedom, this kind of village life was offering her. In her youth she did not have a friend of her age or a television to spend time with, so nature became one of her best friends. At that time the street between Plagia and Agios Kirikos did not exist, it was just a dirt road and the exchange with the „capital of the island“ was difficult. Therefore the village was Stamatoula‘s cosmos. Her life had a regular rhythm: Winter were very slow and quiet, but during summer families returned from Athens and among them were finally kids she could play with. It was a nice balance and Stamatoula did not really miss something. 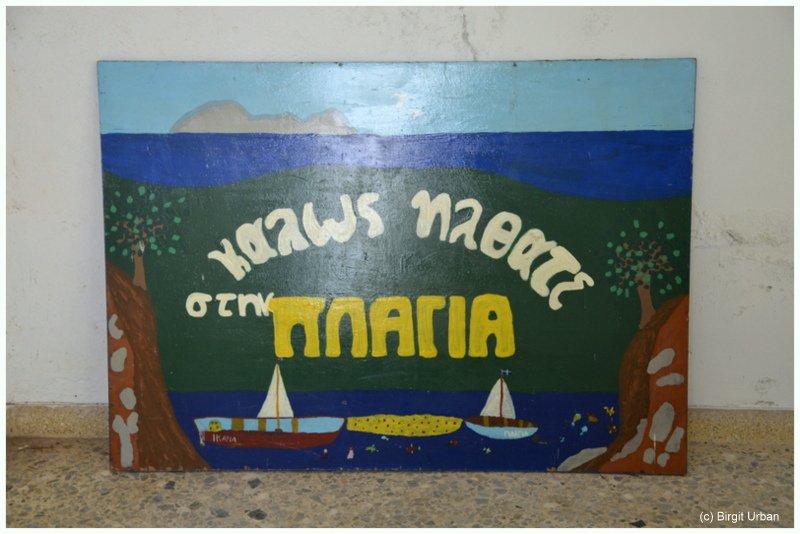 Her world was extended, when she entered high school in Agios Kirikos. It was a trip to make to drive down the 12 km on the dirt road that connected the two towns. In the first years there was no school bus, so either parents were taking the kids to town or they organised a taxi-shuttle to bring the kids from the mountain village down to the main town. With restrictions like that, friendships and social life developped in a different way: additional lessons, like sports and traditional dances, or just hanging around with friends took place directly after school. Once the kids were back to their villages, mothers would not organize „play dates“ as they do it today in the big cities. They were busy with the fields, the household and families and kids just had to get along in the near neighbourhood.

After the end of high-school, Athens was then the next step into an even bigger world. Not easy to digest, but Stamatoula was dedicated to become a kindergarden-teacher and she tried hard to make it. In the big city she missed her family and friends. It is not easy to accept anonymity, a certain lonelyness and a speedy life-style, when you are used to the rhythm of your village. But despite all difficulties, Stamatoula stayed in Athens for more then four years – then time was ready for her return to Ikaria. What a relief! She was lucky to find a job in a kindergarden in Agios Kirikos. Her life was perfect: working in a job on the island she loved – what more to expect?
But then crisis hit also her life and she lost the job. Stamatoula joined the big group of unemployed, but qualified young people and the following years were dominated by a constant struggle of finding a job and paying the bills. Despite all these difficulties, it never came to her mind to quit the island. In difficult times she needed her family and friends around her to move on. On Ikaria she still had a chance to make a living during summer, while working in three different jobs at the same time. It had been tough times, but Stamatoula did not loose her smile. She is an optimistic person, satisfied with little things in her life and so far she managed the crisis, standing on her own feet.

While talking about this, Stamatoula is making a little pause. She nibbles in her hair and puts her bun back up again, saying: “Yes, indeed!  Somehow I managed.“ Well, you can also call it a success-story. She managed to remain on Ikaria, while so many others were leaving. And not only this! Today she is a successful, self-taught business woman, running her little shop with local products. 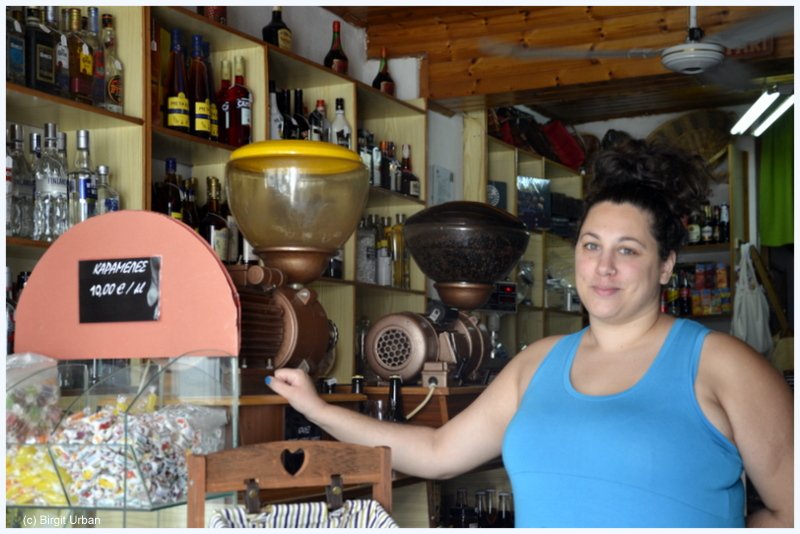 Stamatoula in her shop ‘Kava’ in Agios Kirikos

In 2016 she inherited this traditional shop from her aunt. It is a tiny shop in one of two main streets on Agios Kirikos, where you can buy sweets, coffee, honey, wine from local producers and lots of other sorts of alcohol and sweets. Even though tempeted, Stamatoula did not change the concept of her store, because she wanted to keep the old customers, who had been used to this programme of products and their quality. And she was right: today people are passing by, not only for shopping, but also for a little chat to catch up with the news. Also her neighbours from the other shops are joining in. There is a good cooperation among the shopkeepers in her street, another aspect, why Stamatoula feels comfortable in that neighbourhood. For her job, she even moved from Plagia to Agios. Avoiding the trip to Plagia on a daily basis is more practical from the aspect of her „life-work-balance“, but it also means that she can see her family and friends from the village only during the week-ends. But this can be considered just as a minor negative aspect in Stamatoula’s life. She really likes, what she has and what she had built up so far. As she is does not have her head in the clouds, but her feet on the ground, Ikaria is a good place for her to live. Here she is near to nature, the sea and the people she loves. These are her ingredients for a happy life. Even though she likes travelling and exploring other places, she loves the returns to her island, bringing with her new ideas to make things happen. She is a strong believer that it is now up to the younger generation on Ikaria to get involved in actions and to raise their voice in order to make the necessary changes so that Ikaria can remain a good place to live.This concerns more awareness of the traditional roots of the social life on Ikaria, environmental issues, sustainable tourism and education on the island

This is also the reason why Stamatoula became an active member of the local association of Plagia, because big changes may start with little steps. Over the last years this local association started new activities, such as: they are organising the „Ikarian Run“ – an event that is bringing together hundreds of tourists and Ikarians in a short distance marathon. With this event Plagia is trying to raise the awareness that Ikaria has more to offer than just beaches and panigyria – an aspect that is very important for Stamatoula, too. Therefore she is always the first around, when the association is organising activities for the village, may it be the big panigyri on 08 September or smaller events like film festivals in the platia or the meals at Easter or Christmas for all the inhabitants of the village. Watching her in these moments, how easily she is wandering from one person to another, having a nice word for everybody around, you can easily understand that it had been this village, who raised this kid and made Stamatoula the person she is today. 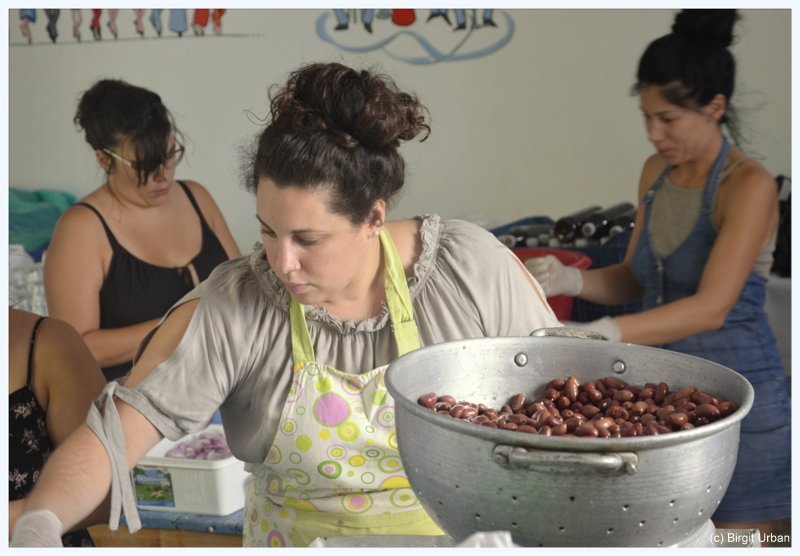